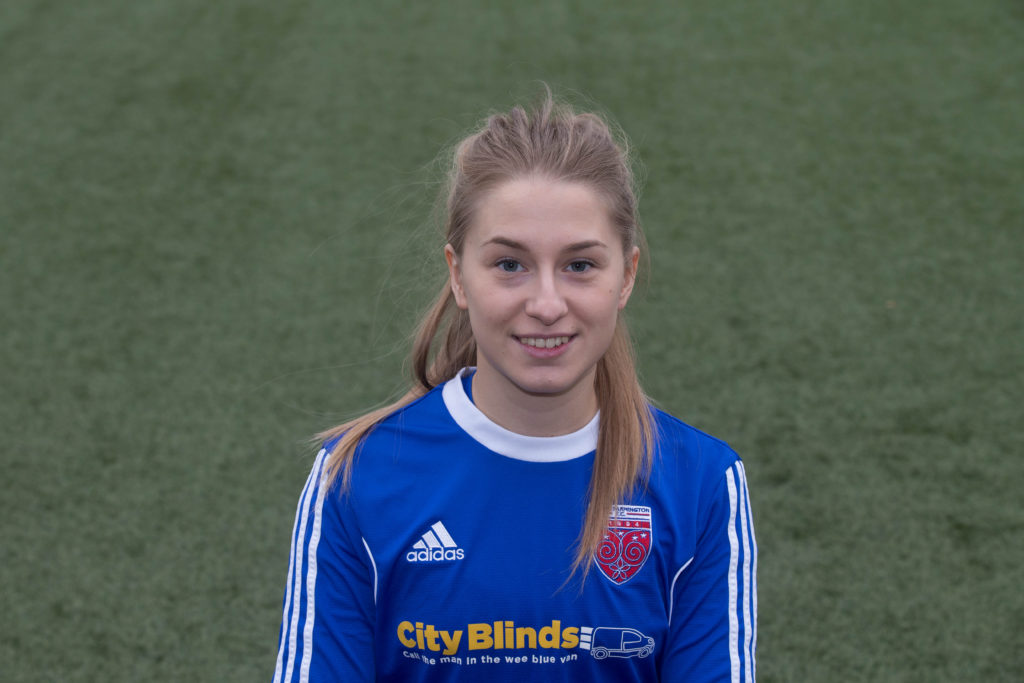 Lotte Deubel has her eyes set on forcing her way into Mark Nisbet’s plans with the beginning of the competitive season a fortnight away.

The versatile 21 year old joined Farmington from Tayside Ladies at the tail end of last season and hopes she can make an impact in a strong squad.

Reflecting on her first few months in the squad, Deubel praised her teammates having made her feel welcome from day one.

“It’s been great so far, as soon as I joined I felt part of the team. The team welcomed me straight away and are a great group of girls to train and play with.”

Deubel had played in Division One of the Scottish Women’s Football League prior to moving to Station Park and she admits the move up to a higher level has been tough so far but is keen to learn.

She said: “It’s been tough, especially as the standard of football within the team and the league is very high, but I enjoy the challenge of this. I learn something at every training session and enjoy being able to improve and challenge myself as a player.”

With one appearance to her name so far, a cameo from the bench in a 7-1 win over Buchan in October 2017, Lotte hopes to continue to work hard to impress the head coach.

“Coming into the team my main goal was to work my way into the starting eleven. I believe if I keep working hard and show my ability in training sessions and games I could hopefully achieve this throughout this season.”

Deubel was impressed with the pre-season programme given to the players as they prepare for the new season and feels this can only benefit them in the long run.

“I see myself as a fit player, and I was very challenged by the programme given, especially the conditioning aspect. This will definitely help us this season to compete against teams in the league where players are very physically fit.”

With the side returning to the top flight, Deubel reckons the lessons learnt from their previous spell will stand the side in good stead for the 2018 season.

“I believe we will be good contenders within the top flight this season. The squad learned a lot from their 2016 season as well as last season and I think this will prepare us a lot better for the season to come.”

She continued: “Winning the title has definitely given the squad a boost to perform well against tougher teams this season and remain in the top flight.”