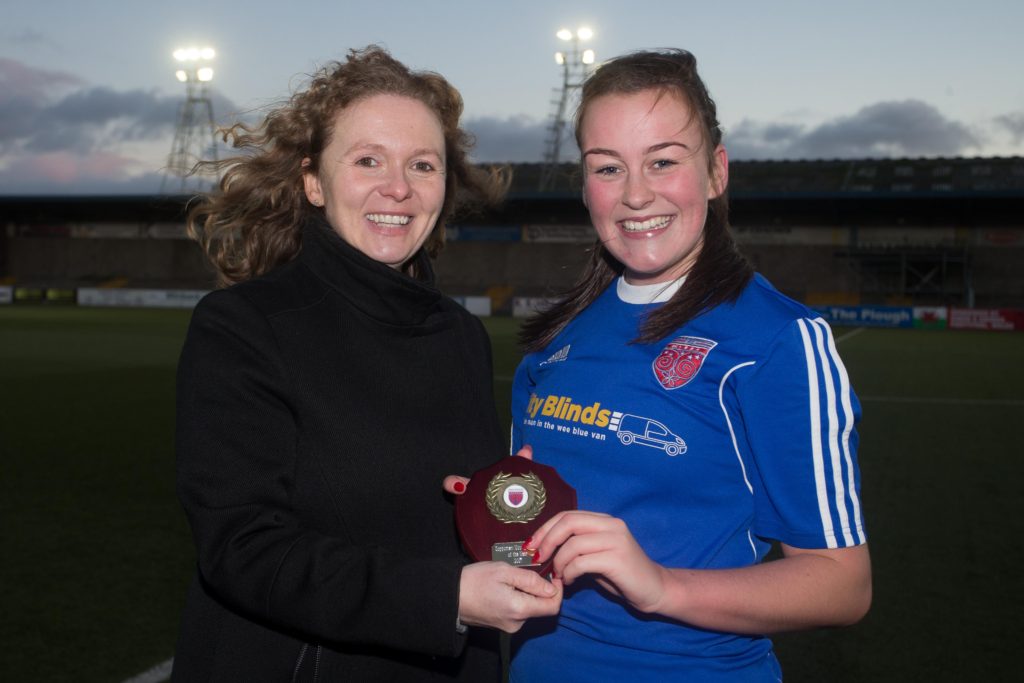 Erin Cattanach was elated to win the Player’s Player of the Year award in her first full season at senior level at the club’s presentation evening on Friday.

The 19 year old added the award to her Supporters Young Player of the Year to cap off a successful season for the defender.

Cattanach was shocked to win the award but she expressed her gratitude to both her teammates and supporters for both awards.

“I was very shocked to receive this award but I’m very grateful that my team mates thought I deserved to win it.”

“I didn’t expect to win the Supporters Young Player of the Year award either but it’s great to know that the supporters enjoyed watching me play.”

After being promoted to the side last season, she struggled to break into the squad but made an impact this season with 22 appearances as well as netting her first senior goal against Hearts in August.

After winning a league title and playing in a Scottish Cup semi final in her first season, Cattanach was over the moon with her year.

She said: “This has by far been the toughest but most enjoyable year. I was delighted to score a goal and play in such a big game against Glasgow City in the semi finals. As a team it’s been a very successful year and everyone is so proud of what we have all achieved.”

The defender has played in every defensive position this season and she feels she is happy to play wherever she is asked to help the team out any way she can.

“I am happy to play anywhere as long as I am on the pitch and influencing the game in any way and in any place.”

Farmington finished their season with a 4-0 win over Jeanfield Swifts and Cattanach was happy to finish on a high as the team didn’t want to lift the league title after losing.

“We all wanted to go out, give everyone a good game and end the season with a win so we were determined to go out and show how champions play. We didn’t want to lift the championship after a loss so we set ourselves a goal to beat Jeanfield and that’s exactly what we did.”

The side bounced back to the top flight of women’s football at the first time of asking with Cattanach feeling confident that the side can build on this year to improve on their 2016 season.

“I think the team is very close and work great together so this definitely gives us a boost going into next season, we are going to go into next year with our heads held high and ready to battle opponents together as a team.”