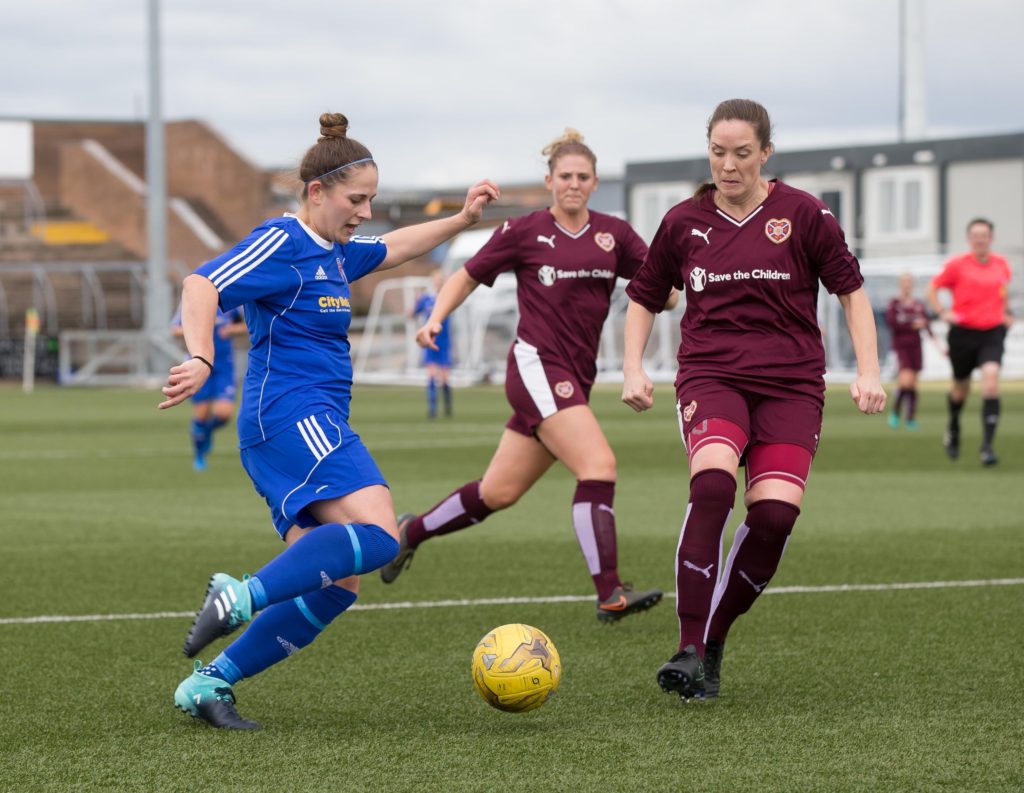 SBSSWPL2 champions Forfar Farmington came from behind to draw 2-2 with Hearts in their penultimate game of the 2017 season.

After a dubious own goal and Danni Pagliarulo’s fantastic free kick put Hearts ahead, goals from Danni McGinley and Caroline Heron completed a second half comeback for Farmington at Kings Park.

Six changes were made for the fixture with Bruce, Shillitto, Cattanach, Parsley, Debio and Brough replaced by McGinley, Davidson, White, McCarthy, Smith and Kilcoyne.

Farmington started off strongly with Robyn Smith’s driven cross across the face of goal finding no takers inside the first minute before Caroline Heron sent a looping header onto the roof of the net from a Kirsty Deans cross.

Heron had another chance in the fifth minute as she flicked a Nicola Davidson free kick wide.

A minute later Hearts took the lead with a bizarre own goal; Megan McCarthy’s pass back bobbled over the foot of Chantelle McKay, the keeper looked to have gathered it on the line but the linesman ruled differently.

Farmington had the ball in the net in the 11th minute when Danni McGinley powered home a Julia Scott corner however the referee ruled it out for a foul.

Deans fired wide with Heron sending a dipping volley past the post but it was the visitors who grabbed the next goal in the 26th minute; Danni Pagliarulo curling a free kick in from 25 yards.

Despite the deficit, the visitors looked to get back into the game with Heron sending a long range effort wide five minutes before the break.

On the stroke of half time a corner found Hearts’ Ashley Carse but she couldn’t get her effort on target.

Farmington came out for the second half strongly as McGinley fired over seconds after the restart.

In the 54th minute Scott had an effort blocked before McGinley met a Scott corner with the shot deflected wide.

From another Scott corner Robyn Smith’s effort was held before Heron was also denied by Ashley Watson on the hour mark.

Cheryl Kilcoyne nodded just past the post but Farmington did find the net in the 67th minute; Smith flicking on a long ball for McGinley to outmuscle the defence before lashing past Watson.

The goal galvanised Farmington and they looked more likely to find the net next with Heron’s effort pushed wide four minutes after the goal.

After increased pressure on the Hearts defence, Heron levelled matters with ten minutes remaining; McGinley’s long throw wasn’t dealt with by a static defence and the attacker sent the loose ball past Watson for her fourth goal since returning to the club.

Farmington kept up the pressure and in injury time could have taken all three points when Nicola Davidson dragged her shot wide shortly before a Megan McCarthy cross was headed millimetres past the post by Smith with Watson beaten.

The result means Farmington are twelve points ahead at the top ahead of next week’s trophy presentation at home to Jeanfield Swifts.