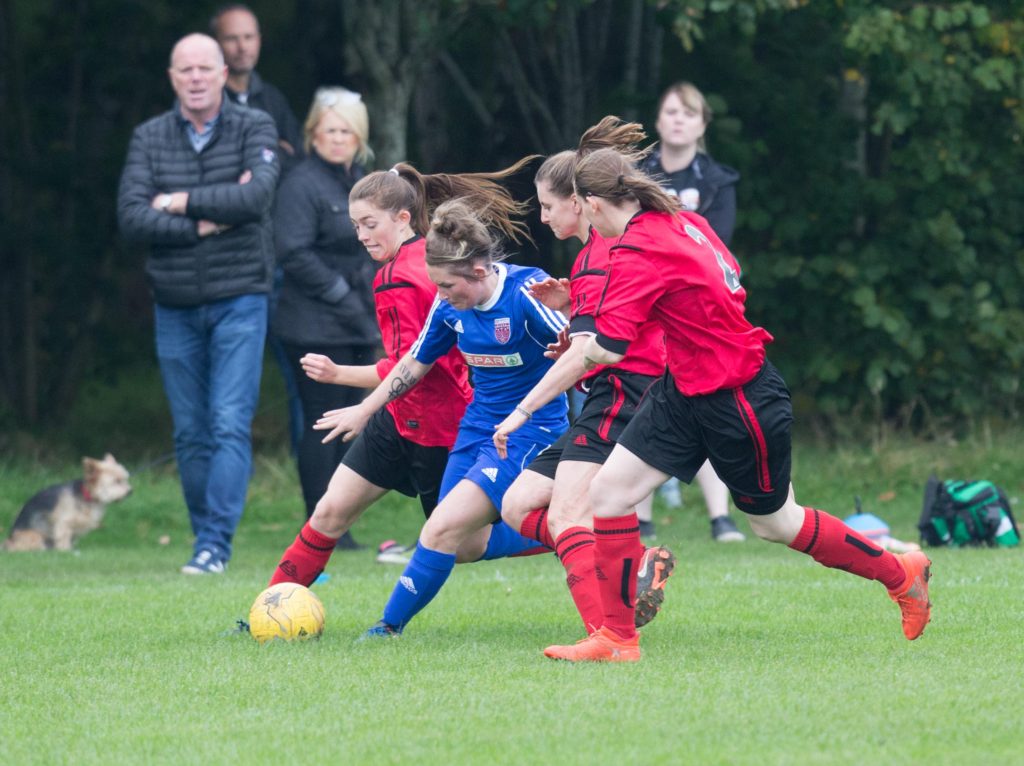 The only change to last week’s team saw Carrie Hoggan replace the injured Jenny Egginton up front. The Ladies started very brightly and had majority of possession in the first 20 mins with Chloe Sturrock forcing the visiting keeper into a good stop with a back post volley. Bayside then had a good fifteen minute spell without really creating too much as the Forfar back four of Chelsie Coyle, Jane Ritchie, Pauline Harley and Megan Hassett worked well with keeper Rachelle Milton to cover for each other when required.

Forfar took the upper hand again before half time and created a couple of chances before a great move in midfield saw Sandra Craig put Katie Hassett clear and she calmly fired home to give the home team a 1-0 half time lead.

The second half was played in much the same vein with Hoggan and Ashleigh Smith’s running up front creating problems for Bayside and the energy in midfield of Emma Stewart, Hassett, Craig and Sturrock was immense considering the conditions.

Frustratingly chances came and went before Megan Hassett was first to react knocking home when her sister Katie’s free kick was tipped onto the bar to double the lead with 20 minutes remaining.

Bayside are however not undefeated in the league because they give up easily and as expected they came right back into the game, going three at the back and five in midfield to pressure the Forfar defence. A through ball was slotted home by Thomson to make it 2-1 and ensure a nervy last 15 minutes.

To be fair it was more likely to be the home side who increased their lead rather than Bayside equalising but the chance to completely finish the game eluded Forfar. A composed, hard working last ten minutes however saw the team run out for a deserved three points, Bayside reduced to ten players in injury time for a second yellow card.

Coach Jeff Rioch commented after the game: “I’m absolutely chuffed to bits for the squad, we fully deserved our win today, created a number of chances and defended very well.  Every player gave 110% for each other and worked tirelessly but also showed composure & quality on a difficult pitch.”

“Chris & Bryan’s team have deservedly won this league and to take the game to them in the manner we did shows how the squad has evolved in the last few months.”