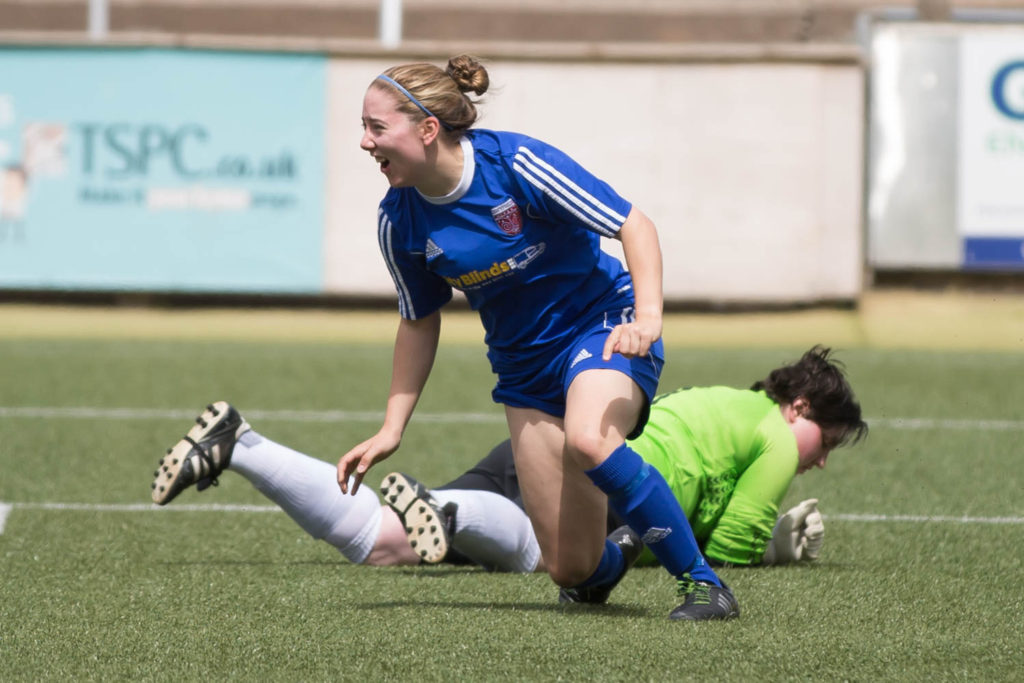 Cheryl Kilcoyne was over the moon to get Forfar Farmington back into the Scottish Women’s Premier League One and insists they won’t take their foot off the gas in the remaining three games.

A Danni McGinley hat-trick alongside goals from Julia Scott and Caroline Heron ensured Farmington won the title with a dominant performance against their closest rivals.

The 22 year old spoke of her delight with the performance from everyone with the squad sticking to the match plan and exploiting Motherwell’s weaknesses.

“I’m very happy, I think we played well overall, we did what we were told to do and stretched the game out wide. I think we deserve to be in the top flight so it’s good to get them back up there.”

Last time the sides played at Station Park, Farmington were 5-0 ahead and the visitors threatened a comeback with three late goals however Kilcoyne was pleased to win the title in such comprehensive fashion.

She said: “I don’t think I can think of a better way to win the title than that, the last game up here we gave them too much leeway and they came back to 5-3 but I think today we did well. We got the job done in the first half and were unlucky in the second half but there’s not much better than a 5-1 win.”

After last week’s Scottish Cup tie against Glasgow City, Kilcoyne reckons they took positives into this week after being given an idea of where they need to be if they are to compete in the top flight in 2018.

“I was happy with my performance, I think everyone stuck together and played the way that we know we can. Playing against City last week gave us an idea of where we have to be next year and I think we took that into the game this week.”

Despite the title win, there are still three games remaining and Kilcoyne is confident they won’t rest on their laurels with the squad aiming to finish the season on a high.

“I don’t think there’s any risk of complacency now we have won the league, everyone is mentally prepared for the next three games, we want to go out on a high and prove to everyone what we’re made of.”