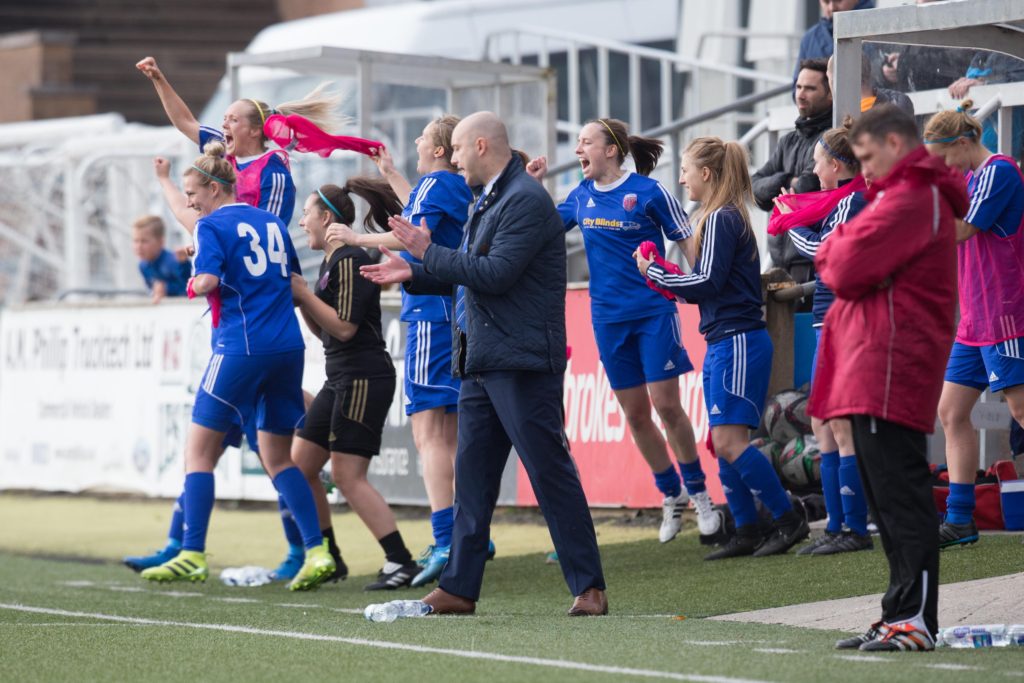 Danni McGinley netted a hat trick with Caroline Heron and Julia Scott completing the scoring while Pamela Liddell grabbed a late consolation for the visitors.

Two changes were made from the Scottish Cup semi final defeat with Kayleigh Brough and Erin Cattanach replaced by Megan McCarthy and Cheryl Kilcoyne.

In front of a 200+ crowd, Farmington looked to be up for it from the start with three chances in the first five minutes.

Alana Bruce sent in two crosses in quick succession with Julia Scott volleying over before Caroline Heron sent her effort at the keeper.

Cheryl Kilcoyne then found Danni McGinley but Sarah Rhind did well to push her shot away.

Farmington went ahead from the resulting corner; Scott’s cross was flicked on by Kilcoyne and McGinley fired home for her ninth of the season.

It was 2-0 inside the opening ten minutes; Scott’s cross found McGinley however the striker couldn’t get a shot away with Heron more than happy to blast the ball past the keeper.

Pamela Liddell had Motherwell’s first chance in the 12th minute but her ambitious overhead kick was off target.

Scott and Heron were denied again before Scott had another shot deflected away from goal; the cross back in from Robyn Smith found Gemma Collier who saw her header held by Rhind.

Nicole Goodwin tested Fiona McNicoll from distance in a rare foray forward from the visitors before Scott and Collier came close again at the other end.

Heron fired wide from a McGinley with before the latter denied by Rhind after the former set her up.

McGinley went one better in the 35th minute; Heron sent Scott clear on the wing and she sent in a low cross for McGinley to slot home.

Sixty second later Forfar netted their fourth as Smith split the Motherwell defence and Scott rounded Rhind before tapping the ball into the empty net.

McGinley was denied again as the game approached half time but Farmington looked to be well on their way to a title win.

The second half started somewhat less frantic than the first half with the first opportunity coming from Liddell when she fired a free kick wide in the 55th minute.

Four minutes later Scott had her own set piece tipped wide before Megan McCarthy headed over from a Davidson ball.

Noble could have grabbed an assist a minute later when Farmington broke forward and she sent a great ball into Beth Shillitto with the winger’s shot parried by Rhind again.

Kilcoyne had a shot deflected over minutes prior to McGinley’s shot being saved by the keeper from a Shillitto cross.

After Heron came close twice again, McGinley completed her hat trick in injury time; Kilcoyne flicked a ball on and the striker was sent clear to round the keeper and slot home.

Motherwell pulled one back through Pamela Liddell’s consolation but it wasn’t enough to derail Farmington as the players and staff celebrated the league win on the full time whistle.