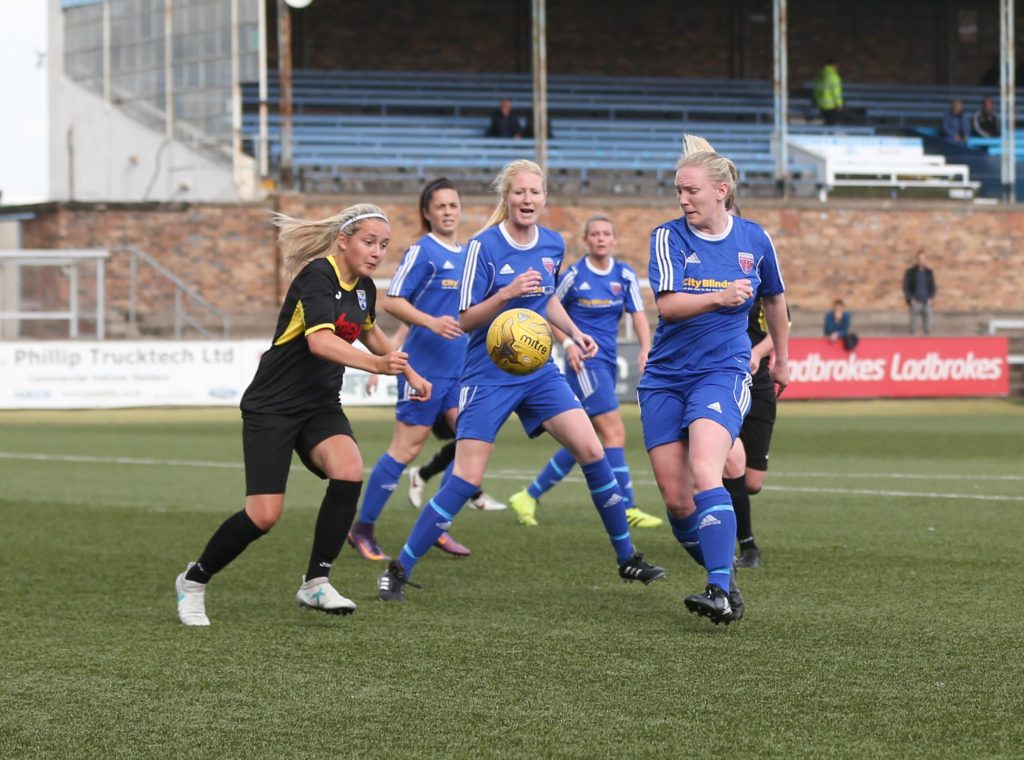 Despite having numerous chances, Forfar Farmington failed to net as they were held to a goalless draw by East Fife at Station Park.

Danni McGinley and Caroline Heron saw their second half efforts rattle the woodwork with Farmington’s lead at the top of the SBS Scottish Women’s Premier League Two cut to six points.

Farmington had chances in the opening ten minutes with Beth Shillitto heading wide from a Robyn Smith cross in the 7th minute. The goal kick from Trudy Hamilton fell to Danni McGinley however her long range effort fell wide of the mark.

A minute later McGinley saw her shot inside the area blocked while the follow up was held by Hamilton.

In the 13th minute Smith set up Caroline Heron and she was denied again by a defender. Two minutes later Smith curled a free kick past the post.

An Alana Bruce throw in shortly after found Heron and she flicked the ball over a defender before seeing her effort deflected wide.

Heron’s long range shot was held by Hamilton before Bruce curled wide as Farmington kept up their pressure.

East Fife’s only chance of the game came in the 33rd minute; Isla Brown’s corner was headed over by Melissa McAllister.

Two minutes later Heron sent in a cross for McGinley but she could only send a header over.

McGinley came closest to scoring three minutes into the second half when Heron set her up and the attacker’s effort was pushed onto the bar by Hamilton.

Heron nodded over from another Smith corner in the 50th minute and shortly after the duo were involved in another corner; the former’s header cleared off the line.

Smith and Bruce combined for the winger to send an effort towards goal but she was denied by Hamilton.

McGinley came close again twice in quick succession, firing wide on both occasions before Bruce set up Heron on the hour mark only for Hamilton to divert the shot onto the post.

Winger Smith curled over in the 70th minute meanwhile Kayleigh Brough and Heron had efforts blocked by the visitors defence.

Farmington kept up the pressure as they looked for a late winner with Megan McCarthy heading over before Cheryl Kilcoyne fired wide.

In injury time Julia Scott sent a free kick into the area but Heron nodded over with the former curling inches past the post following another attack.

The final chance fell to Heron in the second minute of injury time; Smith’s cross fell to the attacker but her shot was held by Hamilton.

They travel to Buchan next week as the league continues to edge towards the end of the season.