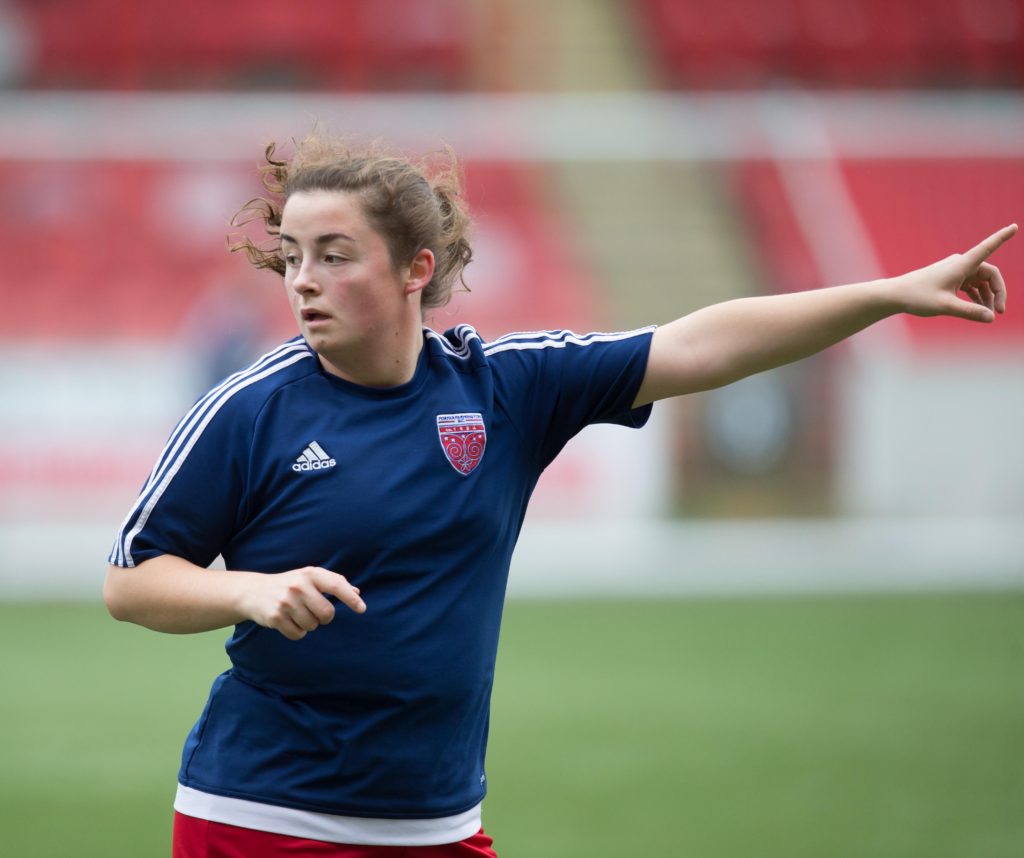 Alison Debio reckons this year has been a learning curve for her as Forfar Farmington continue their hunt for promotion.

The 20 year old has been impressive for Farmington since joining at the end of 2016 but feels it has been a big step up that she has adjusted well to.

After playing for Falkirk, Stenhousemuir and Glasgow City throughout her youth career, Debio had been playing football for the University side when living in Dundee before signing for Farmington in December. The midfielder believes that despite this, she is enjoying her first season in the Scottish Women’s Premier League.

“This year has been a big learning curve for me after only playing university football for the past few years. It’s been a big jump but I think that I’ve developed a lot and I have a good understanding of what is expected of me when I play.”

“Some performances have certainly been a bit rocky on my part but I am continuing to learn, aiming to get better and help the team in the best way.”

Farmington have lost just once in the league this season and have won five out of their six games since returning from the summer break, drawing the other. Debio admits Farmington maybe haven’t been at their best but is happy they are still getting results.

“I’d say we certainly haven’t been performing at our best but we have been getting results, which is the main thing. We’ve been working really hard so hopefully we can settle back down and the good performances will come.”

They return to league action this weekend against an East Fife side that has taken points off the other two teams near Farmington and Debio has warned that there will be a target on Mark Nisbet’s side and ensure they don’t become complacent.

She said: “The past few weeks have shown there are no “easy” games in this league and no team should be underestimated. Sitting at the top of the league also puts a huge target on us, every team wants to beat the team at the top and we have to be prepared for that.”

“As a team we all need to respect every team that we come up against, after all the only thing we can control is own our performances.”

The side faced Cumbernauld Colts in the Scottish Women’s Cup quarter final last week and after a 2-1 win, the midfielder reflected on a win where she felt Farmington maybe weren’t at their best against a Colts side that deserved credit for their performance.

“I think we, as a team, may have underestimated Colts. This combined with us not settling within ourselves and playing the way we know we can play didn’t mix well and the game reflected this. Colts put in a good performance and deserve credit for pushing us and taking advantage of our mistakes.”

They were drawn against last season’s Scottish Women’s Premier League 1 winners Glasgow City and Debio believes it will be a good test for the side in what is many of the squad’s first semi finals, with others having played against City in the 2012 final.

“Every player wants to play in these types of games. Glasgow City have changed a lot since I played there but they are still currently the best team in Scotland. It will be a really tough game but it’s a game that, if we are promoted, will be a regular fixture next season.”

“I think will be a great test for us. As I said, everyone wants to beat the team at the top and the only way we can do this us by controlling our own performances and playing our best.”