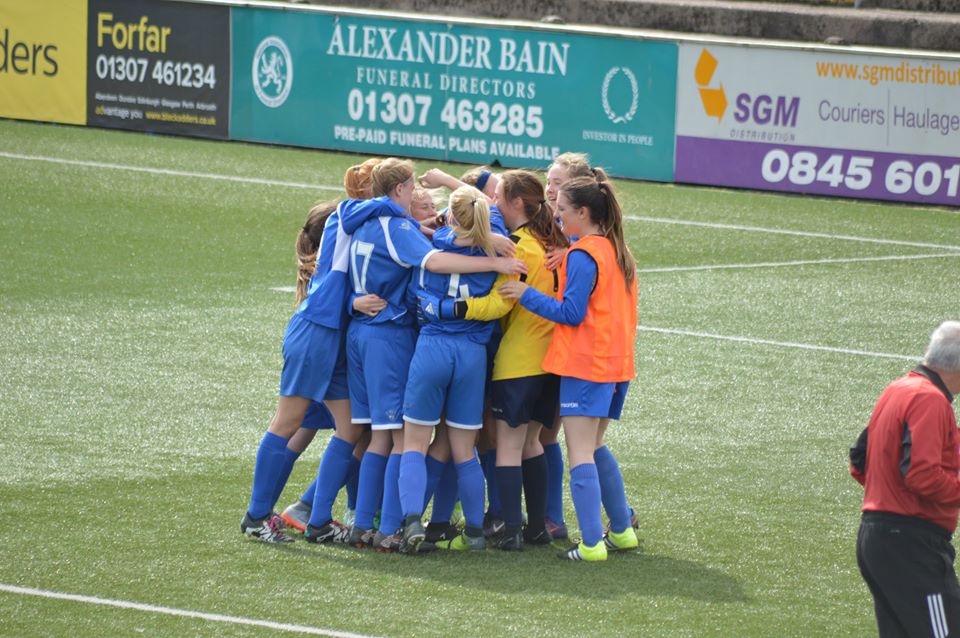 The group of girls in our U17 side faced a real challenge in their Scottish Cup quarter final when they hosted Rangers to Station Park. A beautiful end of summer Angus day welcomed our friends from Glasgow and it provided the backdrop for a keenly contested cup-tie that saw Forfar eventually edging through on penalties.

The season so far for our U17s has been a challenging one what with a number of players out with injuries at different times of the year and the loss of some players however the team-spirit and togetherness of this side is something that always seems to help them overcome the hurdles that they face. Sunday’s performance and result is further evidence of this.

Rangers showed what a good passing side they are from the beginning of the game. Forfar’s decision to sit a little deeper allowed Rangers to play a passing game from the back however they found it difficult to break through and a get any real efforts on the Forfar goal. They kept plugging away though and did create a real chance when a through ball to one of their strikers looked as though a goal was a certainty.  Just as the ball was fired goalwards it was blocked by an astroturf burning sliding challenge by Forfar’s Aimee Robertson; the kind of commitment that ran through the whole Forfar team. Forfar were very much in it and pressed on the counter-attack at every opportunity however the sides went in at half-time at 0-0.

The second half saw more of Forfar as an attacking force and it was indeed Forfar who took the lead 10 minutes in when they broke the deadlock with a well-taken goal. Philippa McCallum fired in a perfectly placed corner right on top of the six yard box and it was met beautifully by the head of Katie White whose header powered into the Rangers net.

Rangers pressed forward for an equaliser but their efforts were kept at bay by the hard working Forfar midfield and their solid defence. Forfar carved out a number of chances but they couldn’t get that decisive second goal. Just as it looked as though Forfar were going to see out the match Rangers drew level. A mis-hit shot looked as though the save was a straightforward matter for our keeper Suzie Adam however it somehow squirmed through her hands into the net. The Forfar team showed their spirit as they, and especially Suzie, responded to this set-back and they should really have wrapped it up with minutes to go however the Rangers keeper denied Steffi Simpson with a couple of very good saves.

With the game level after 80 minutes, extra-time was to follow.

It was clear that Forfar’s confidence had grown as the game progressed and it was them who went ahead again when Philippa McCallum met a through ball from Katie White to hit a beautiful left-foot volley over the head of the Rangers’ keeper into the net. It looked as though the tie was Forfar’s however Rangers drew level at the death when their left winger’s shot came off the post and fell to their striker who poked the ball home for the equaliser to the joy of the travelling support. Forfar again had chances to win the tie but the final whistle came and penalties had to be faced!

Forfar went first and Philippa McCallum, Kacey McCabe and Katie White fired excellent penalties home to put their side 3-2 up. Suzie Adam then gave her side the advantage with a great save.  Aimee Robertson pressed that advantage home with a great strike and Caitlin Mitchell calmly fired home for a 5-3 victory on penalties.

This was a pulsating cup-tie that had all spectators on the edge of their seats. We wish to say thank you to our visitors from Glasgow for the sporting nature of the day and we wish them every success for the remainder of their season.

On to the semis finals for the girls from Farmington and very well done on a great performance.