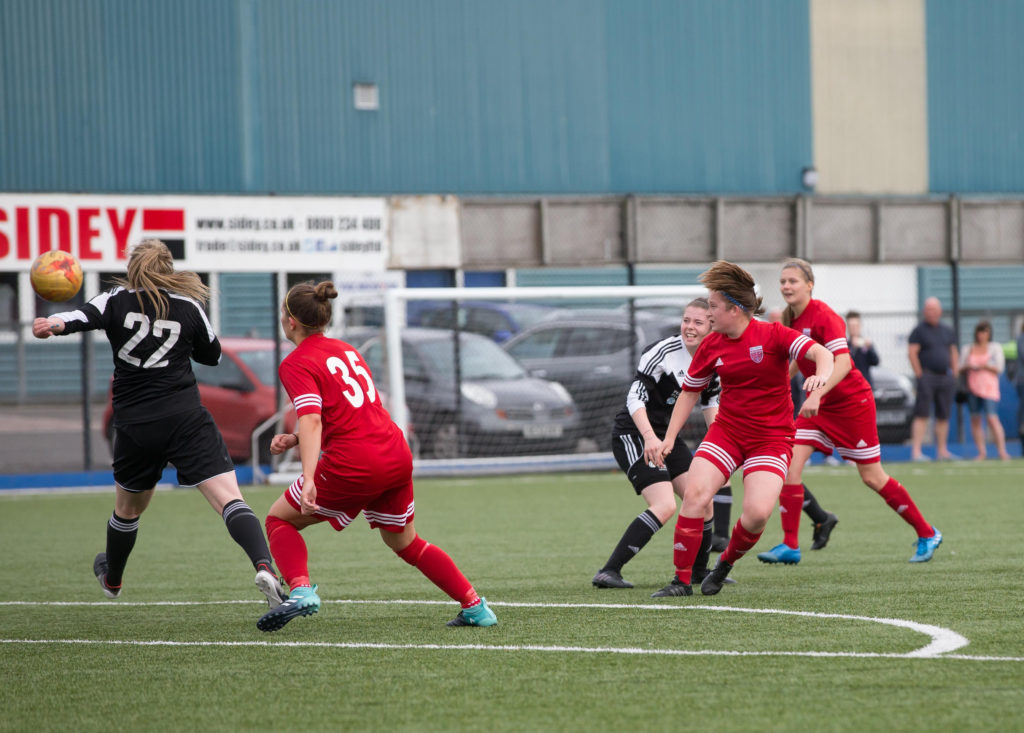 Laura Parsley grabbed a late equaliser as Forfar Farmington kept their six point lead at the top of the league with a 1-1 draw away to Jeanfield Swifts.

After going behind to a Jade McDonald goal, Parsley equalised in the fourth minute of injury time following Rhianna Tweedie’s second yellow.

Farmington made two changes from their win over Buchan in the Scottish Cup with Leah White and Beth Shillitto replaced by Gemma Collier and Danni McGinley.

Cheryl Kilcoyne had the first opportunity three minutes in; Kirsty Deans finding the attacker but she fired wide of the mark.

Four minutes later Danni McGinley sent a cross into the danger zone for Robyn Smith to knock down to Kilcoyne however the striker sent her effort straight at Bobby-Leigh Cochran.

Jeanfield’s Eilidh McIntyre could have put the hosts ahead after twenty minutes when she looked to race away but Alana Bruce did well to get back and clear the danger.

Nicola Davidson and Julia Scott were denied by Cochran before the latter curled wide from the edge of the box in the 38th minute.

A minute later Scott sent a free kick into the area but Megan McCarthy couldn’t get her header on target.

Deans had the ball in the net four minutes after the break from a Scott corner but the ref disallowed it for a foul.

The hosts took the lead after 52 minutes; Fiona McNicoll’s kick couldn’t find her target and Jade McDonald capitalised before sending a lob over the keeper.

Farmington looked for a way back into the game but McGinley fired wide before she was inches away from a Davidson ball.

McIntyre blasted straight at McNicoll in the 68th minute for Jeanfield meanwhile Davidson curled over from distance.

The hosts looked to see the game out but in the third minute of injury time Rhianna Tweedie was sent off for a second bookable offence when she fouled Davidson.

The Farmington captain took the free kick in her own half and sent the ball forward; it wasn’t cleared properly and Laura Parsley sent a 20 yard effort over the head of the keeper, the ball bouncing over the line after hitting the bar twice.

The point, coupled with Motherwell and Glasgow Girls’ draw means that Farmington keep their six point lead at the top of the Scottish Building Society Scottish Women’s Premier League Two.