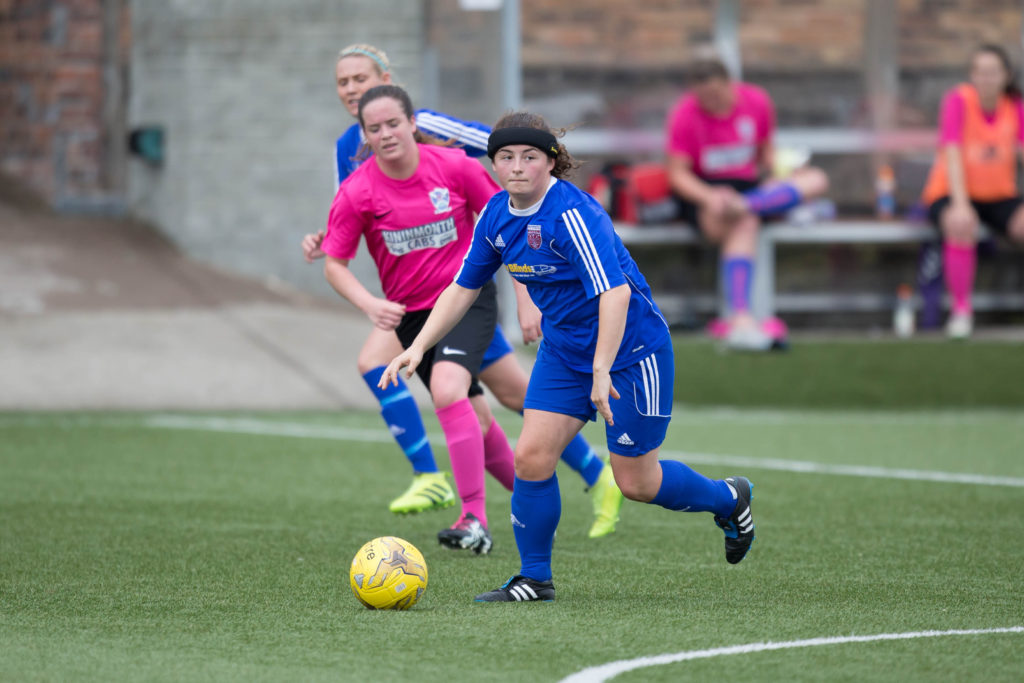 With Forfar Farmington sitting six points clear at the top of the Scottish Women’s Premier League Two table, Alison Debio is pleased with how her first season at Premier League level has gone so far.

The 20 year old has been almost ever present so far in the first half of the season and the former Cumbernauld Colts player admits she is enjoying the challenges faced while playing in midfield.

Farmington have lost just once in the league, winning nine of the other ten games while drawing the other and although the loss reduced the lead at the top, Debio reckons it is still a good position to be in during the summer break.

She said: “The first half of the season has been a good learning experience. We have pushed forward and been developing as a team which has created a great environment that has produced a lot of positive performances.”

“If we were offered being 6 points clear come the halfway point we would have gladly accepted it at the start of the season.”

Despite the lead, the midfielder is under no illusions that the side will have to work hard in every game with other teams looking to take a scalp against the league leaders.

“We knew the teams in this league would all pose different problems that we would have to overcome and we have done very well to deal with some difficult opponents.”

She continued: “The obstacles that we have overcome have also highlighted areas for us to work on which is always good to ensure we stay at the top. Now we have played everyone at least once we definitely have a target on our heads and we are the team everyone wants to beat.”

Debio had previously played as a defender prior to her move to the club, moving forward to midfield at the start of the season. She expressed an eagerness to progress in her position having started all but one game this season.

“I feel that I definitely understand my role a lot more and I enjoy the different challenges that we face in there, it keeps you on your toes. I may have started a lot of games but every start is an honour and each game highlights areas that need work, this ultimately pushes me to become a better player and offer more to the team.”

The former Falkirk and Stenhousemuir youth reckons her battling, no-nonsense style of play has helped her settle in her new role, even if it means collecting a few bumps and bruises along the way.

“I’ve always been the type of player who puts their all in and if it means I pick up a few knocks here and there then that’s okay with me. Whilst the team keeps progressing positively I’ll continue to work hard and carry out my role to the best of my ability when called upon.”

Debio continued: “For a team to work there needs to be balance across the pitch and I feel like on a whole our squad is very well balanced and we have lots of options to call upon.”

Farmington were drawn against fellow SWPL2 outfit Buchan in the third round of the Scottish Cup and despite defeating the Aberdeenshire side 4-0 twice this season, Debio reckons it will be a tough game regardless of the previous results.

“Playing against a team we have already played twice this season is obviously a good draw as we know how they play and how we can overcome the obstacles they throw at us. Having said that, I feel like we are equipped to deal with any challenge thrown at us.”