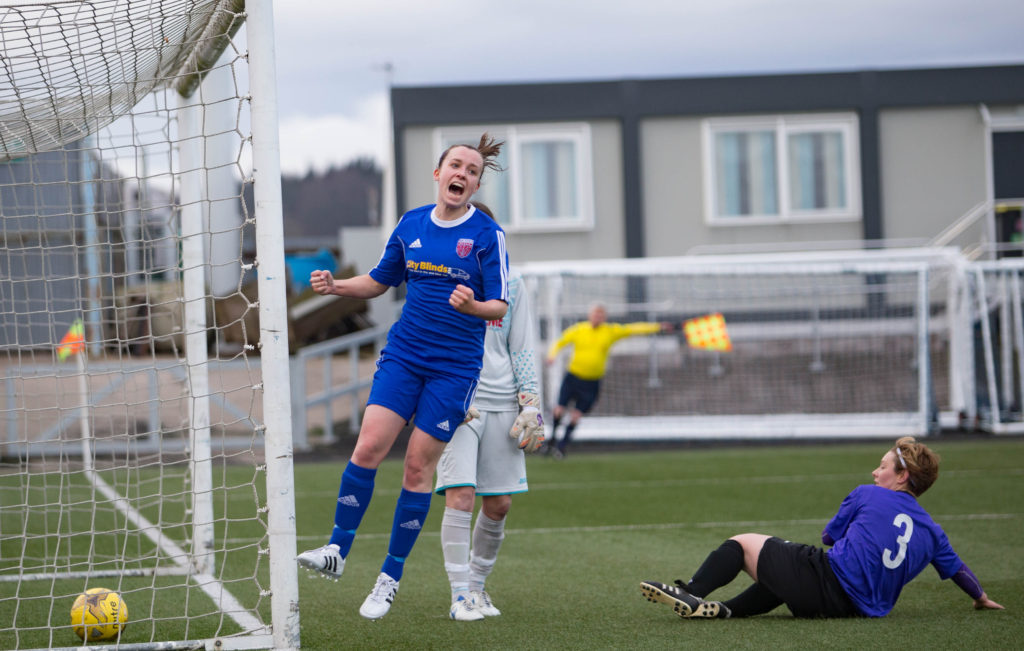 Forfar Farmington fell to a late winner as their eleven game unbeaten run came to an end on Sunday with a 3-2 defeat at Motherwell.

Danni McGinley’s smart opener and Robyn Smith had Mark Nisbet’s side 2-1 ahead however a late Pamela Liddell goal saw the hosts take all three points to reduce the lead to six points at the top of the Scottish Women’s Premier League Two.

Farmington made a perfect start in the second minute when Robyn Smith made her way down the right wing before delivering a cross for Danni McGinley to volley past the keeper from six yards.

Pamela Liddell saw her shot fly off target in Motherwell’s first chance after 16 minutes while Kirsty Deans came close to doubling the lead when Julia Scott laid the ball off for her; the midfielder’s low effort drilled wide of the mark.

Motherwell equalised shortly after the half hour mark with a well taken free kick; Sophie Gallacher curling home from 20 yards to square things up.

McGinley latched on to a McCarthy ball three minutes after the equaliser and despite cutting the ball back into the danger zone to Cheryl Kilcoyne, the side’s top scorer was crowded out and the ball was eventually cleared.

McGinley and Scott came close again for Forfar; the former’s header parried by McGregor before the latter fired the rebound over.

The last chance before half time came for the visitors again when Scott’s corner was flicked on by McCarthy and Smith sent an acrobatic effort just over the bar.

Two minutes after the restart and Farmington were ahead again; this time McGinley turning provider as her run forward ended in her squaring the ball for Smith to grab her sixth goal of the season.

Motherwell pulled themselves level once more in the 52nd minute after Erin Cattanach fouled Liddell inside the box. Gallacher stepped up to take the spot kick and sent Fiona McNicoll the wrong way for her second of the afternoon.

Chances were few and far between for a period following this with Nicola Davidson’s free kick flying wide the only opportunity of note.

In the 72nd minute the hosts had a decent chance to go ahead when Liddell cut the ball back for Lauren Kerr however the midfielder could only blast over.

McCarthy headed wide from a Scott corner as the game entered the final ten minutes with Smith also going off target after being set up by McGinley again.

Farmington could have been ahead with six minutes left with Scott seeing a 25 yard effort tipped wide meanwhile her corner was met by McGinley; her unorthodox effort hit the bar and bounced off the ground. The visitors claimed for a goal however the officials judged it to have not been fully over the line.

Kirsty Deans saw her effort diverted wide and following the corner Motherwell broke with Liddell racing forward before curling the ball past McNicoll to keep all three points at Ravenscraig.

The result means that while the lead at the top of the league has been reduced, Farmington are still six points clear heading into the summer break.