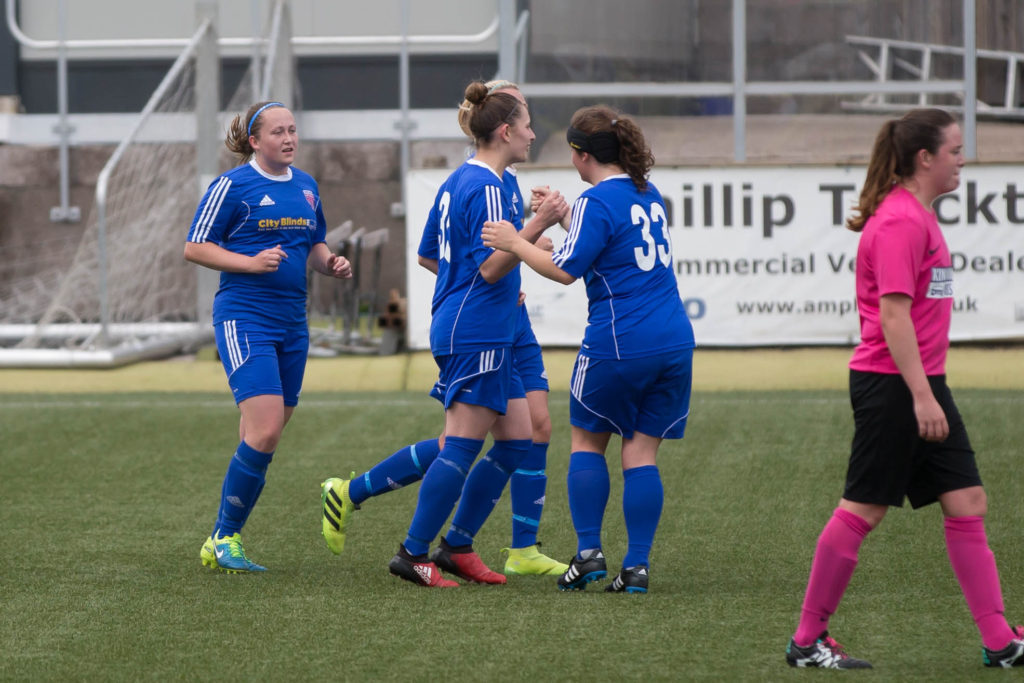 Forfar Farmington overcame a tricky hurdle as they opened their Scottish Cup campaign with a 5-2 win in Kirkcaldy against Raith Rovers.

Mark Nisbet made three changes to his side as Nicola Davidson, Alison Debio and Cheryl Kilcoyne were replaced by Kirsty Deans, Laura Parsley and Ellie Cook, who was handed her debut for the SWPL side at 15 years old.

Kayleigh Noble saw her effort blocked in the first minute from a Julia Scott corner as Forfar looked to make another quickfire start however their hosts battled well and almost created a couple of opportunities themselves.

The Raith defence was difficult to break down, a testament to their current position in their league and Farmington were reduced to long range efforts from Danni McGinley and Kirsty Deans.

In the seventeenth minute Forfar finally breached the defence and it was Julia Scott who opened the scoring; Fiona McNicoll emptying the ball up the park and Scott raced towards the box before lashing the ball past the keeper.

McGinley came close again before Scott saw a free kick from the edge of the box tipped over in the 26th minute.

The lead was doubled in the 34th minute when Leah White’s cross was taken down by Noble for Kayleigh Brough to fire home from just inside the box for her first senior goal at the club.

Gemma Collier was unlucky to miss from two yards out as a last second bounce deceived the defender however the ball was in the net again sixty seconds before half time. Noble made her way to the byline before cutting the ball back for McGinley to net her second goal in three games since returning to the club.

The hosts grabbed a goal just four minutes into the second half when Kerri Dinnel was sent clear and lobbed McNicoll from distance.

It wasn’t long before the three goal lead was restored; just two minutes later Brough netted her second of the afternoon when she fired home from 25 yards.

In the 57th minute it was five for Forfar and two for Scott as she curled a low effort past McLachlan from just inside the box.

Leila Strachan fired straight at McNicoll while sub Sophie Young could have netted less than ten minutes after coming on when she rattled the bar from a Noble cross.

Megan McCarthy also came close however the defender gave away a penalty in the 74th minute when she handled a Dinnel cross.

Tiegan Clark stepped up and slotted the spot kick home despite McNicoll diving the right way.

Brough fired over as she looked to complete her hat-trick with defender Erin Cattanach sending a long range shot wide of the mark.

Ellie Cook saw her late effort tipped over while Young stabbed the ball wide from the resulting corner.

Farmington now advance to the third round despite Raith’s efforts. The Kirkcaldy side can be proud of their efforts and will no doubt do well in the remainder of their league campaign.

For Mark Nisbet and his players it is a return to league action this weekend when they travel to take on second place Motherwell in the final fixture before the summer break.