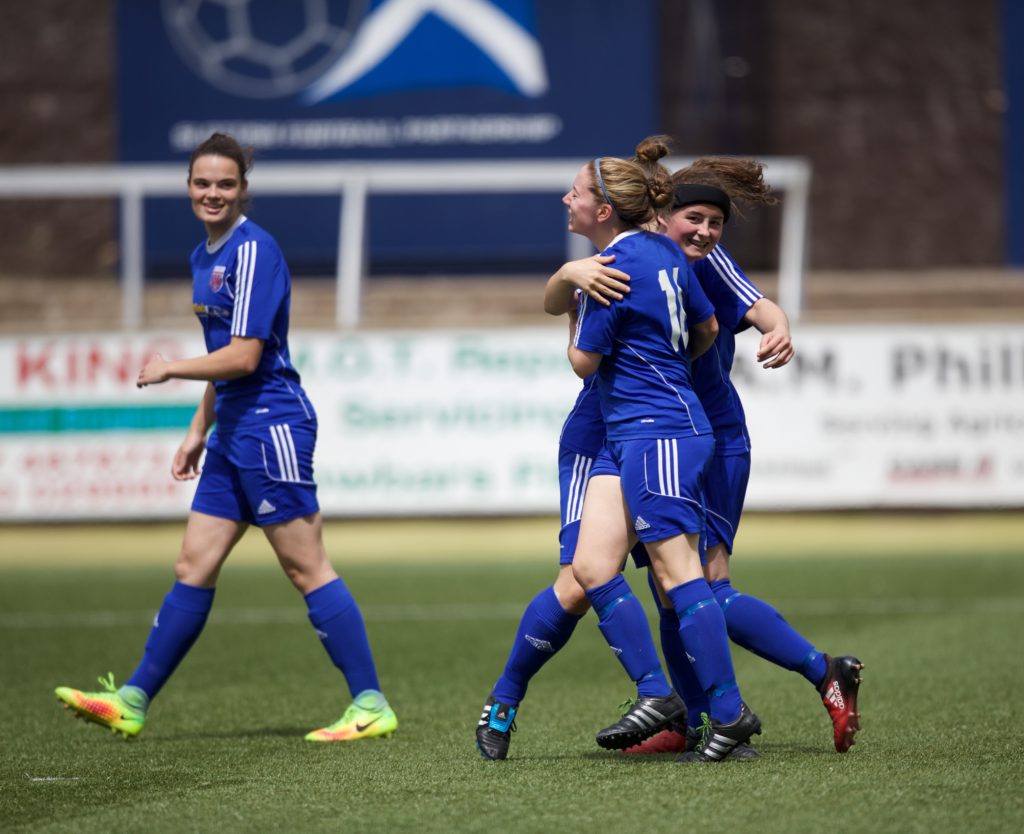 It is now ten games unbeaten for Forfar Farmington after a comfortable four goal victory at home to Buchan on Sunday.

Cheryl Kilcoyne opened the scoring after just sixteen seconds with Nicola Davidson scoring from the spot before the break. An own goal made it three before Danni McGinley netted her first goal since returning to the club last week to complete the scoring.

Two changes were made from the previous week’s win in Leven with Kirsty Deans and Laura Parsley making way for Kayleigh Brough and Danni McGinley.

Farmington got off to a perfect start when a long ball allowed McGinley to race clear of a static defence and she cut the ball across goal for Cheryl Kilcoyne to stab past the keeper.

Alison Debio came close to netting her first goal for the club shortly after however her efforts were well held by Buchan keeper Lauren Sangster.

Julia Scott struck low at Sangster in the 20th minute with Forfar hunting for a second and Kilcoyne was unlucky not to find the net a minute later with a drive forward that ended in a save from the keeper.

The only Buchan chance of the first half came from Jo Murphy; the winger could only strike wide of the mark.

Kilcoyne had another shot pushed wide before Megan McCarthy hit the bar with a header from Scott’s corner.

In the 36th minute Farmington were awarded a penalty when Sangster took Kilcoyne down. Captain Nicola Davidson stepped up and blasted the spot kick home.

Farmington came close to a third on the stroke of half time when Debio’s well struck effort looked goal bound however Sangster did well to claw the ball wide.

McCarthy had the ball in the net six minutes into the second half however the assistant had her flag up for offside.

It was 3-0 just four minutes later; Davidson’s cross was sliced into the top corner by Buchan defender Fiona Ritchie from six yards out.

McGinley edged closer and closer to scoring as the second half progressed with Sangster denying her every time.

In the 70th minute Kilcoyne sent a through ball to Scott and she turned a defender before seeing her shot tipped wide.

Buchan sub Caitlin Matthews tested McNicoll with a fierce shot with the keeper having to look sharp to push over the bar.

McGinley, Scott and sub Laura Parsley all had efforts held by the keeper but it was the former who completed the scoring in the 83rd minute; Parsley laid the ball off for her and after turning a defender lashed home for her first goal since returning.

The attacker had a couple of chances to add to the tally late on but couldn’t find the target.

In the final five minutes Fiona McNicoll came off as U15 keeper Oliwia Gach made her Premier League debut.

Farmington stay nine points ahead of Motherwell at the top of the SWPL2 and will face them in a fortnight in the final game before the summer break. This week sees the side travel to Kirkcaldy to face SWFL2 side Raith Rovers in the SSE Scottish Women’s Cup second round.