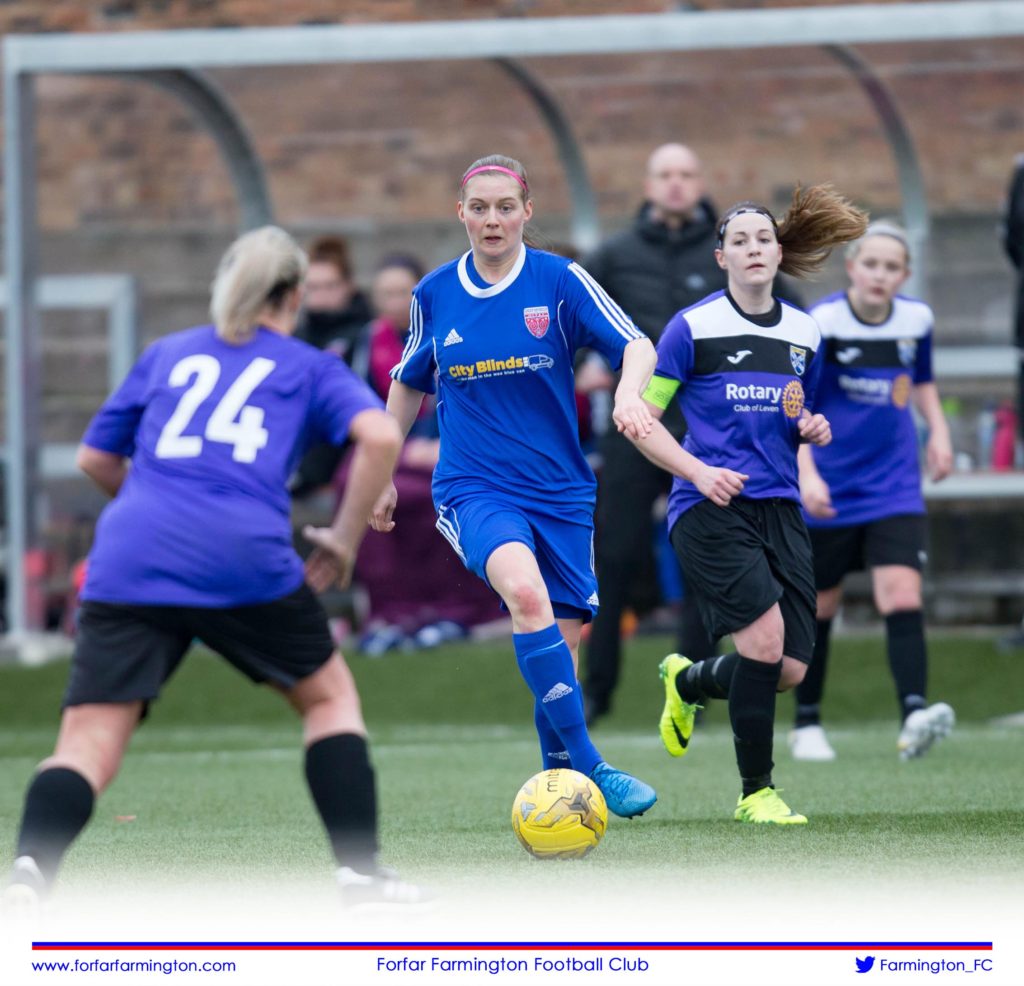 Kirsty Deans reckons everyone in the team did their required job efficiently as Forfar Farmington defeated East Fife 3-0 on Sunday.

Deans netted the third as the club extended their lead at the top of the Scottish Women’s Premier League Two to nine points while making it nine games unbeaten in the league.

The midfielder praised her team mates following the result at a tough venue against tricky opposition despite their position in the table.

“I am delighted with the result today. We knew we couldn’t be complacent, even though the game had been billed as a top vs bottom clash, and credit to East Fife they gave us a great game. They have picked up points on their home patch and we knew they would get stuck in, so to keep a clean sheet and take all three points is the perfect result for us.”

26-year old Deans fired past the Fifers keeper Alexis Keir from the edge of the box in the 87th minute for her second of the season, the first also coming against the same opposition in March. The tenacious midfielder was delighted to grab a goal but kept the focus on the squad as a whole.

She said: “I was very pleased to get on the scoresheet today, it’s always good to make a contribution to the team with goals but lots of credit has to be given to the full squad as everyone played their part brilliantly. I don’t think anyone gave up on a ball and even when we went ahead we were focused again to add to the tally and get the job done well.”

The side found out after the game that nearest challengers Glasgow Girls had dropped points meaning they went nine points clear at the top and Deans felt the mood in the changing room was buzzing following the announcement.

“To learn that we were nine points clear was brilliant and added to the buzz in the changing room after the game. This is obviously a great position to be in at this stage in the season but we are fully aware that we can only control our own results.”

She continued: “We must remain focused on continuing our form and if we do this we will earn our reward. The changing room is very positive and you know that anyone in the room will have your back, we are a very supportive family and this keeps everyone confident.”

Farmington signed striker Danni McGinley from Jeanfield Swifts during the week and made her debut as a sub during the second half with Deans impressed by her cameo role and tipped her to make an impact over the coming weeks.

“Danni did brilliantly when she came on and looked dangerous anytime she got the ball. I have no doubt that she will help the side improve and score some important goals for us as the season progresses.”