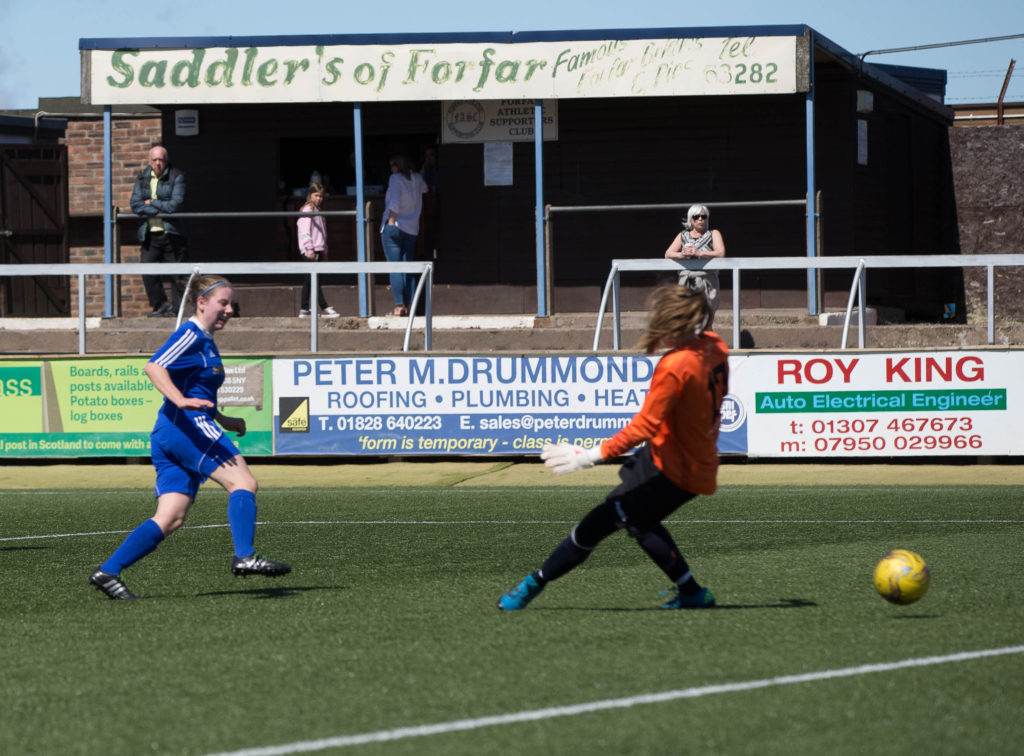 Unbeaten Forfar Farmington overcame a resilient East Fife to extend their lead at the top of the Scottish Women’s Premier League Two to nine points.

Cheryl Kilcoyne and Kirsty Deans netted in the final quarter of an hour to ensure victory after Julia Scott’s first half opener.

Two changes were made from the previous week’s win over Glasgow Girls with Erin Cattanach and Robyn Smith unavailable; they were replaced by Leah White and Laura Parsley. New signing Danni McGinley had to be content with a place on the bench however she made her debut midway through the second half.

Farmington, under the charge of coach Kev Candy for the day with Mark Nisbet unavailable, had the first proper chance with Kirsty Deans firing wide from long range in the 12th minute before the hosts’ Lauren Wheatley struck straight at Fiona McNicoll.

Cheryl Kilcoyne had an effort deflected into Alexis Keir’s arms shortly before finding her again with a curled effort as Forfar looked to break down a tough East Fife defence.

Julia Scott was inches away from connecting with a Nicola Davidson cross just after the half hour mark with Keir gathering just before Scott reached it.

Laura Parsley scooped over from six yards after excellent work from Scott meanwhile Cheryl Kilcoyne beat the keeper only to see her shot cleared off the line five minutes before the break.

Scott did open the scoring on the stroke of half time when Nicola Davidson sent a perfect ball down the left flank for the winger to race onto and make her way into the box to fire past Keir for her third goal in four games.

The second half had an even start with Alison Debio and Teri Skivington going close for both sides while Chloe Guppy saw her shot deflected wide as East Fife looked for an equaliser.

Latest signing Danni McGinley came on for her debut in the 58th minute and six minutes later she had the ball in the net as she stroked home a Megan McCarthy pass however the referee deemed her to have strayed offside.

McCarthy came close to another headed goal after last week’s double as she rose to meet Scott’s corner although she couldn’t keep her header down and the chance flew over the bar.

With twelve minutes left the win was all but clinched when Kayleigh Noble threaded the ball through for top scorer Kilcoyne and she slipped the ball under the advancing keeper for her seventh of the season.

Kirsty Deans added the icing on the cake with three minutes to go; Scott’s initial effort was parried and she squeezed the ball to Deans who battled with the defenders before lashing home from the edge of the box.

Scott had chances to add another late on but couldn’t beat Keir in injury time as Farmington took all three points back to Forfar. The result, coupled with Hearts and Glasgow Girls’ draw means that Mark Nisbet’s side are now nine points ahead of new second place side Motherwell and Glasgow Girls ahead of next week’s home fixture against Buchan.