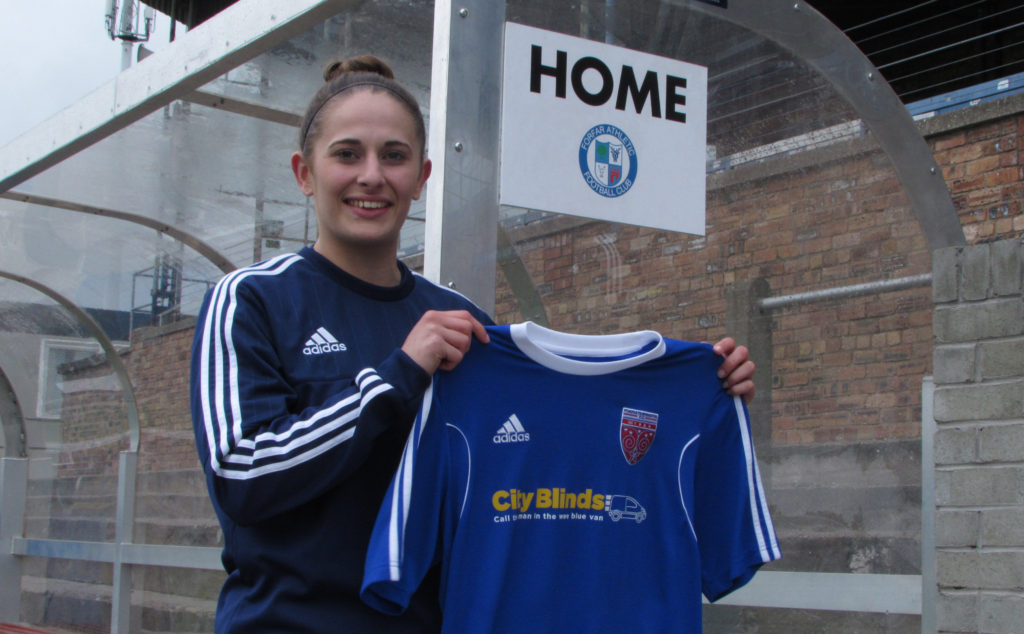 The club are delighted to announce the signing of highly rated striker Danni McGinley from Jeanfield Swifts.

McGinley, who will wear the number 35 shirt, joins the Scottish Women’s Premier League Two leaders after scoring over 100 goals in three and a half years at the Perth based club.

The 22 year old was previously with Forfar prior to joining Jeanfield and she is excited to return and link up with some of her previous teammates.

Speaking shortly after signing, McGinley praised the players and backroom staff at the Station Park side: “I’m looking forward to returning to Forfar, it’s an exciting club with a lot of potential and good opportunities available.  It’s made up of a great bunch of players, both on and off the park, as well as benefitting from experienced coaches and dedicated background staff.”

McGinley has played with fellow attackers Robyn Smith and Cheryl Kilcoyne during her previous spell and has also progressed through youth sides with Smith including a trophy laden period at Perth City. The striker expressed her eagerness to gel with the rest of the team, beginning this Sunday when the side visit East Fife.

“Playing in the same team as these girls in the past has always been pretty successful and rewarding for me but I’m looking forward to getting to know the rest of the team better also as Forfar are a positive and direct team with a lot of attacking threats and that suits me perfectly.”

Her time at Jeanfield saw the striker help them to a promotion and the SWFL First Division League Cup in 2015, and McGinley hopes she can continue her form in Mark Nisbet’s side.

“It’s always nice to be recognised for scoring goals, and it’s such a rewarding part of the game.  Being highlighted as top scorer in the Scottish Women’s Premier League in 2016 was a great achievement for me and I would love to continue my goal scoring form here at Forfar.”

She continued: “I am looking forward to the new challenges that are coming my way, joining a team that are in such good form will be no easy task but I hope I can contribute largely in the team’s continued success.”

McGinley faced Farmington earlier in the season in a tight 2-1 win for her new club and she reckons the league is tightly contested by every side with Motherwell one of the current in-form sides.

“The league is so closely contested that no game is seen as an easy game.  I have noticed that Motherwell appear to have picked up form as the first half of the season has progressed so I think they will provide an interesting challenge.”

Head Coach Mark Nisbet was elated to add Danni to the squad as Farmington look to gain promotion back to SWPL1 at the first attempt.

“It’s great to be able to add Danni to the squad; she has a track record of scoring goals at this level and also brings a real physical presence to the group. I feel Danni has matured and developed well since her last spell at the club and wish her every success. I know she will work hard at her game but also for the club and she will be a real asset as we continue working towards gaining promotion.”