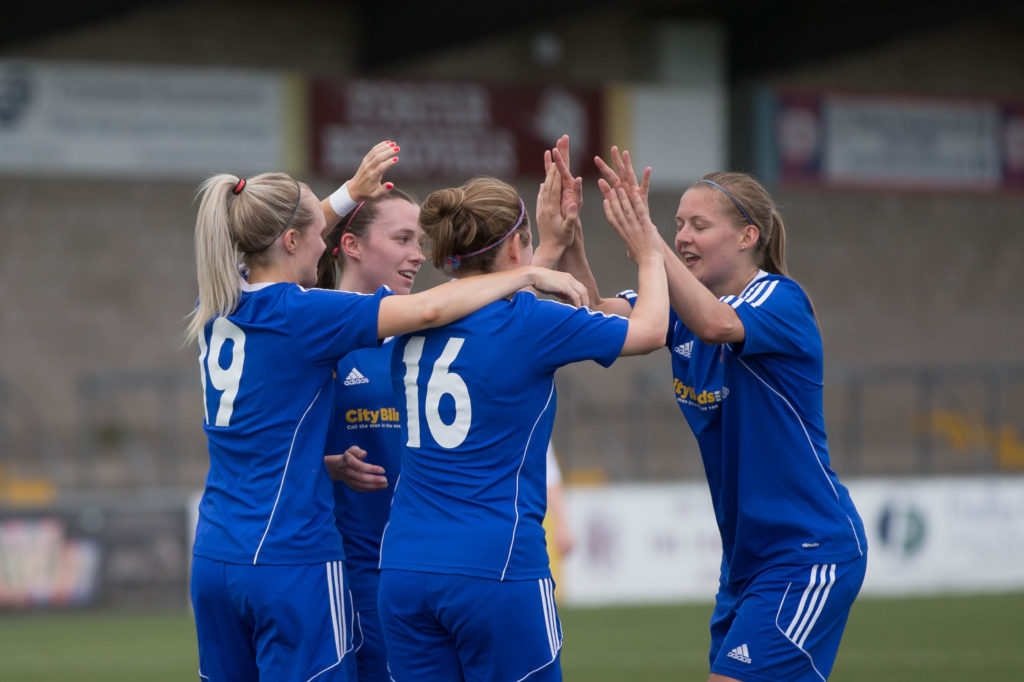 Forfar Farmington extended their lead at the top of the Scottish Women’s Premier League Two with a 3-0 win over title rivals Glasgow Girls.

First half goals via Cheryl Kilcoyne’s sixth of the season and a Megan McCarthy double was enough as Hearts also dropped points, meaning Farmington are now seven points ahead.

One change was made from the win over Buchan with Cheryl Kilcoyne returning to replace Laura Parsley.

The visitors came close early on with Georgina McTear heading over from Kirstin McGuire’s corner in the seventh minute.

Three minutes later Farmington were ahead as Kilcoyne latched onto a Kirsty Deans ball and controlled it before firing past the keeper at her near post.

Mark Nisbet’s side looked to capitalise on this and were unlucky minutes later as Kayleigh Noble’s looping header was held.

Deans tested Lisa Kerr with an effort from the edge of the box in the 22nd minute but Kerr was more than capable to gather the shot.

The lead was doubled in the 34th minute following a corner from Julia Scott as Megan McCarthy powered a header past Kerr for her third of the season.

The duo combined for a carbon copy effort two minutes later; McCarthy racing to the near post to head home.

Kilcoyne almost added a second herself just before the break as she lashed a shot towards goal with the keeper parrying her shot.

Glasgow Girls came out for the second half looking hungrier than they did in the opening 45 with Megan Murray and Rachel Halliday having chances in the period following the restart.

Lauren Evans saw her stinging free kick pushed away by Fiona McNicoll in the 65th minute before being cleared.

With twenty minutes left Kirsty Deans had a shot deflected into the grateful arms of Kerr meanwhile Robyn Smith struck at the keeper from just inside the box.

A poor clearance in the 84th minute ended in Kilcoyne shooting straight at Kerr while the final chance of the game fell to Glasgow Girls sub Maxine Fury with an acrobatic effort that flew over the bar.

Farmington now move seven points ahead of Glasgow Girls, who remain in second place and hope to continue their unbeaten start to the season when they visit East Fife next week.