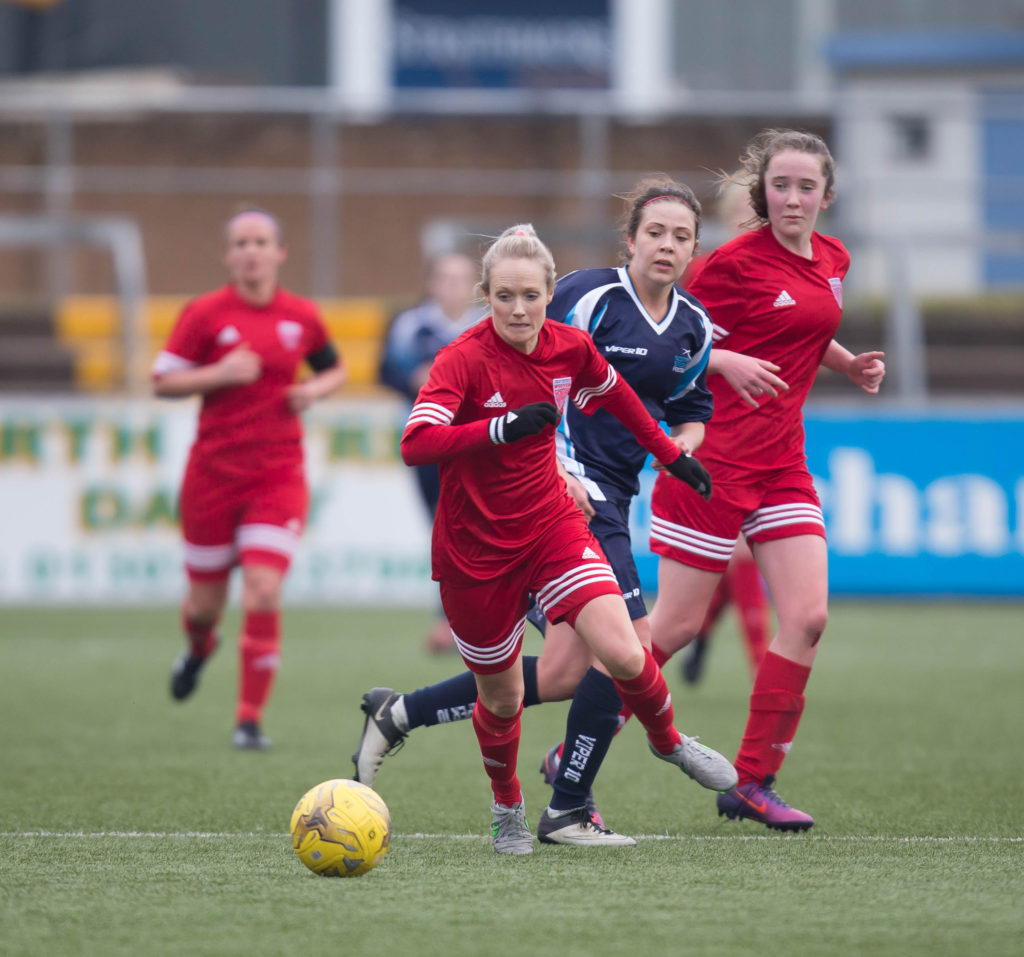 Julia Scott revealed she is loving life at Forfar Farmington with the team spirit high at the moment following their 5-0 win over Edinburgh University Hutchison Vale.

The attacking midfielder is in her third spell at the club after rejoining in January 2016 and the former Inverness City player feels Farmington is now her home club.

Scott grabbed the third goal in Sunday’s comprehensive win and while she felt she didn’t play as well as she would have liked to, she was delighted with the squad performance.

“I’m very happy with today’s performance. To score five and not concede is always a good day. We started off slow however but changed a few things in the second half which was allowed us to play with more freedom and score goals.”

She continued: “I don’t feel it was my best performance but I’m delighted to get on the score sheet, and be part of a good team performance and result.”

2016 saw Farmington relegated from the top tier of the Scottish Women’s Premier League however they have won five of their first six games, drawing the other and Scott is happy at how they have started the season.

“Last season was a major disappointment, it is never good to be relegated however we have come into this season with high hopes of doing well and we have done that so far with hard work and good team organisation and spirit which has allowed us to express ourselves going forward.”

The former Scotland internationalist reckons Forfar is her home club now and spoke highly of the team spirit in the dressing room.

“I feel Forfar is my home club now. They have been very good to me and I appreciate pulling on the Forfar jersey every Sunday. The coaching staff and players are terrific with a great ethos to do well and improve very week so it’s hard not to enjoy yourself here.”

She said: “We have young players who have stepped up to the plate to play SWPL2 which is fantastic. All the girls support each other on and off the field which is helping with our performances this season so far.”

The side travel north to face Buchan this Sunday and Scott is under no illusion that it was be a tricky game with the Maud based side notoriously difficult to play against on their Maud Pleasure Park pitch.

“It is always hard to travel to Buchan, the pitch is tight and Buchan are a competitive side so we can’t take things for granted. We will go into Sunday’s game with the same mind set and attitude as we would do for any other game and hope to continue our winning ways.”