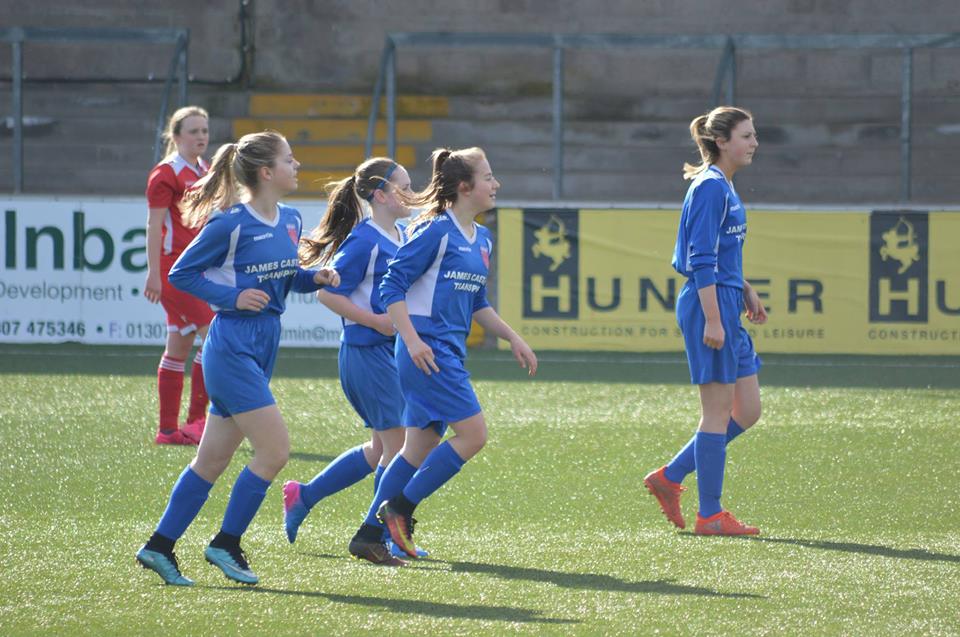 The U17 side had to postpone rolling their chocolate eggs due to our Easter Sunday fixture through in Kirkcaldy against Raith Rovers Ladies. Their efforts on the day meant that an end of game wee bite or two of chocolate would be in order as they put in a committed and impressive performance in their victory over their opponents from the Lang Toun.

The initial stages saw both sides come to terms with the slippery conditions however it wasn’t long before Forfar’s pressing play saw them apply a consistent level of pressure on the Raith midfield and defence. This period of pressure resulted in a number of efforts being thwarted by a combination of good defending and goalkeeping from the Raith keeper. The pressure continued to build however and the deadlock was eventually broken when Eve Warden picked up the ball just outside the box before firing a low drive into the net. Forfar’s passing and pressing play was proving quite a handful for Raith and further goals were added to the away team’s tally with Steffi Simpson, Philippa McCallum, Kacey McCabe and Taylor Clifford all finding the net on at least one occasion.

The girls from Raith Rovers found some joy playing down the hill in the second half and their lone striker showed great commitment to her team’s cause as she harassed the Forfar defence at every opportunity. On the day though Forfar proved to be a difficult outfit to control and their continued levels of pace and pressing play some them adding more goals to further increase their lead. The second half Steffi Simpson and Taylor Clifford add to their goal count with Katie White, Melissa Coull, Erin Ross and Lucy Corbett, who scored her first goals for the 17s team, all adding to the goals for Forfar.

Raith Rovers did manage to pull one back late in the game when a dangerous inswinging corner was flashed into the net by the head of their hard-working no.10 from midfield.

Overall it was a very convincing victory on the day for the girls from Forfar. They didn’t allow their opponents any time or space to settle and at times their passing and movement was very impressive.

We would like to thank all at Raith Rovers for their warm welcome on a cold day and we wish them all the best as their season moves forward.