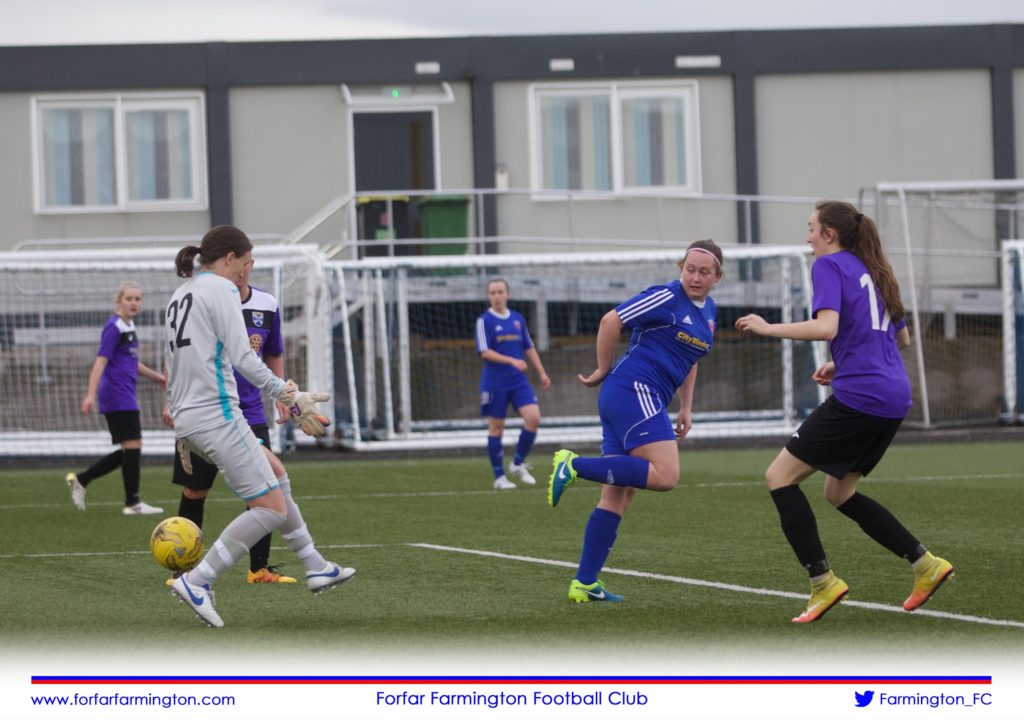 Forfar Farmington started life in the second tier of the Scottish Women’s Premier League with a bang on Sunday as they convincingly defeated East Fife 4-1.

Head coach Mark Nisbet handed a first start to Leah White meanwhile Anne Murrie made her first SWPL appearance after impressing for the U23 side.

Farmington got off to a dream start just five minutes in when Robyn Smith’s cross was taken down by Julia Scott for Kirsty Deans to rifle home.

The Fifers had their first chance three minutes later however Johanna Clark could only fire straight at Fiona McNicoll.

Laura Parsley was inches away from connecting with a teasing Beth Shillitto cross minutes before she saw her shot from a Scott cross blocked.

Smith found the roof of the net in the 25th minute with a long range effort before her curled strike on the half hour mark was held by the keeper.

In the 39th minute Farmington should have probably extended their lead; Scott’s cross was met by the head of Smith and her header was diverted towards goal by Parsley however it was tipped wide.

Shillitto set up Scott on the stroke of half time with the winger firing into the keeper’s arms.

It didn’t take long for Farmington to get going again after the break and they doubled their lead just five minutes in; Scott’s corner found McCarthy and after East Fife failed to clear their lines Laura Parsley cheekily backheeled the ball through the legs of Anderson.

Cheryl Kilcoyne had been in fantastic form for the U23 team and was rewarded with a place in the SWPL match day squad. Three minutes after coming on, the striker came close to proving her worth when she latched on to a Nicola Davidson ball but her strike was blocked by Anderson.

Deans and McCarthy sent efforts off target and in the 64th minute East Fife gave themselves a lifeline when Wheatley’s corner was bundled home by Melissa McAllister at the back post.

Kilcoyne tested the keeper again before being involved in Farmington’s third with twelve minutes left. She sent Scott racing down the left wing to send in a perfect cross for Smith to slip under Anderson for her first goal since June last year.

It was 4-1 in the 88th minute after a fantastic piece of play from sub Kilcoyne. The attacker, who had another couple of chances saved prior, raced on to a through ball before weaving her way through the East Fife defence and finding the bottom corner of the net.

Scott could have added another in injury time but the tireless winger could only watch as her shot flew inches past the post.

It was a good win for the side to open their season with after last season’s relegation and they are on the road next week with a short trip to Perth to face Jeanfield Swifts at the McDiarmid Park pitches.