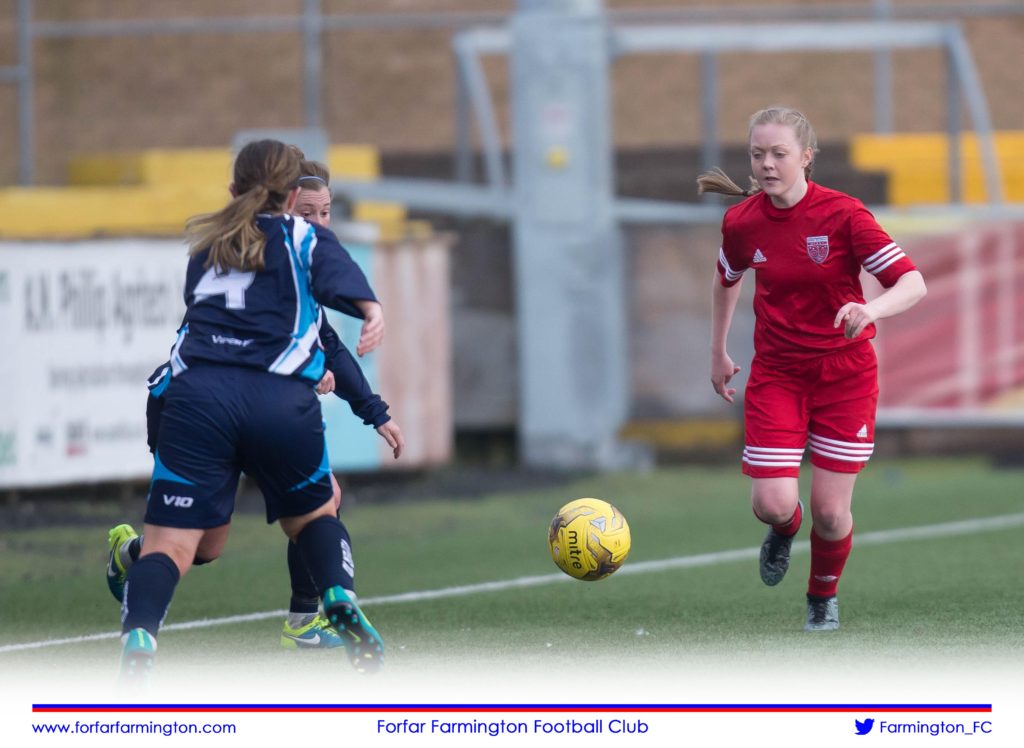 Leah White was disappointed to lose in Forfar Farmington’s final pre-season game on Sunday but believes it will help them prepare for their season opener in a fortnight.

The side travelled to Hamilton Accies’ New Douglas Park and despite Robyn Smith and Kirsty Deans hauling it back from 2-0, a late penalty saw Hamilton edge a game that could have gone either way.

White feels that although they lost, they can take positives from their second half performance into their first league game against East Fife on March 12th.

She said: “It is disappointing to lose today despite a great team performance. The game was close throughout and other than conceding a few unlucky goals we were competing well and the game could have gone either way.”

“The second half had a much higher intensity about it and I think everyone contributed to the game effectively and worked hard for each other to create opportunities. On the whole I think it was a really good team performance in which we can take positives from moving into the upcoming season.”

The 16 year old defender came off the bench midway through the second half and reckons she is gradually improving in a slightly more attacking role.

“Coming on as a sub today, I feel like I performed well and contributed to the team effectively. I’m not naturally an attacking player but I feel like I’m coping well with playing on the wing and helping to create opportunities for the team. All of the girls make me feel welcome and are so encouraging on the pitch which makes playing in the game a whole lot easier.”

White has been involved with the Premier League match day squad over pre-season and the youngster hopes she can build on this and force her way in to the starting XI over the course of the season.

She explained: “I have really enjoyed playing with the SWPL team over preseason and I think it has been a really positive experience for me. Having the opportunity to play with girls of such a high standard is great and I think it will really benefit me as a footballer.”

“I hope if I continue to work hard in training that I will continue to play with the SWPL team and hopefully impress Mark and be given the opportunity of a position in the starting 11.”

The club began a new project over the final months of 2016, using one Performance Squad for their senior and U23 match day squads. White has been a part of this and believes that it has helped the younger players improve weekly.

“I think the creation of the performance squad was great and I feel like it is really beneficial to players like myself, Caitlin Mitchell and the rest of the younger girls. Training with such experienced footballers and coaches has really boosted my confidence and I hope I continue to improve in this positive coaching environment. Training with the senior players is really beneficial as they are always looking for ways to give you advice and help you become a better footballer.”