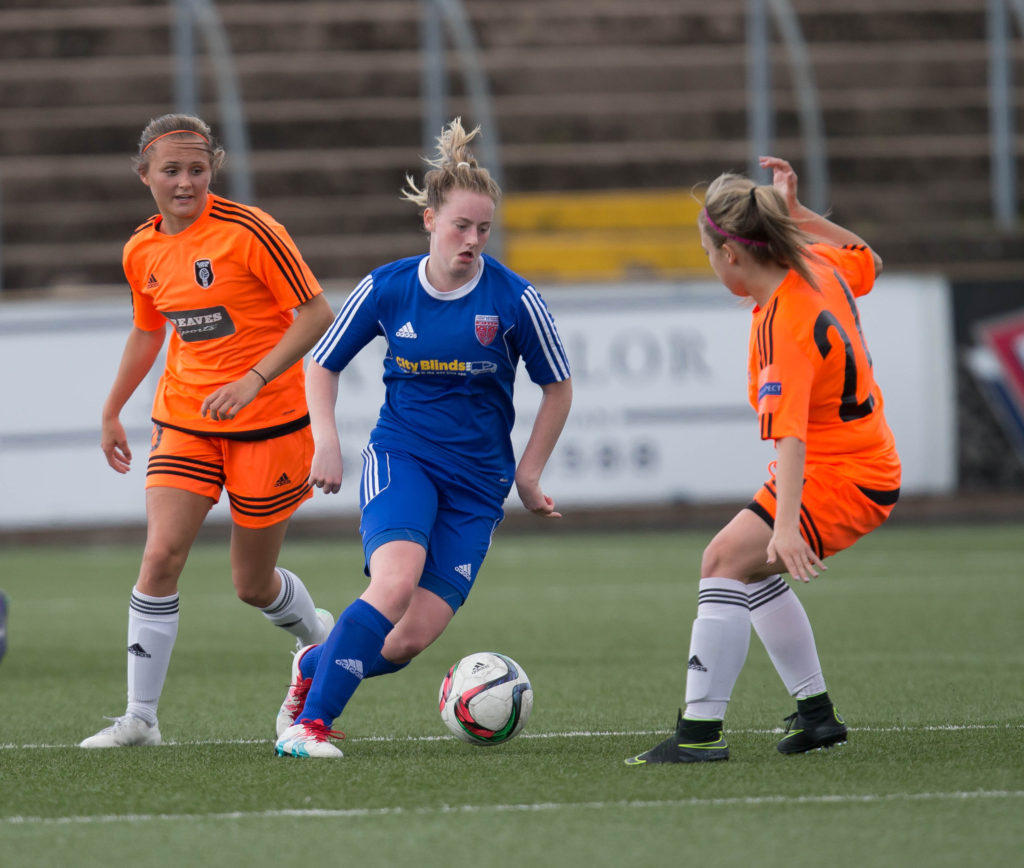 Lindsey Dunbar was in a positive mood despite Forfar Farmington’s defeat with the side making Glasgow City work for their result last weekend.

The 18 year old midfielder felt Mark Nisbet’s squad stuck to their task and reckons they can take the positives in to their next game against Rangers next Sunday.

Dunbar, who made her senior debut in March 2014, was also upbeat about her own performance but feels there is still room to improve.

“I thought today’s game went well, we had an aim for the game and we stuck to that throughout the game and fought well. We worked on what we needed to in training during the week and took it into the game which I think helped us a lot in a positional sense compared to previous games.”

The youngster continued: “I feel my performance could have been better, I got given a task and I was able to stick to it throughout the game. I think my positioning was a lot better and has improved a lot since the start of the season but there is still a lot of room for improving.”

The side will now take part in SWPL2 in 2017 and despite the drop down, Dunbar reckons it could be a blessing in disguise for the squad and vows to take on board this season’s lessons.

She said: “This season has been a massive learning experience for us. We have all battled and stuck to our task each week, however in previous games things have just not went our way. We just need to make sure we take everything on board from this season and take it into next year and just build on that each week.”

“I think going down will not just help us as an individual but as a team as well. I believe we could bounce straight back; with the amount of talent and love for the game in the squad, I’m excited to see this happen.”

Despite a tough season for Dunbar and her teammates, the midfielder feels they can end the season on a high in their final two games against Rangers and Stirling University.

“We can definitely end the season on a high; the team have been amazing throughout the year. Each week we are given a different task which everyone has the ability to stick to. If we continue with our hard work and heart for the game and club I believe we could do so. I think it’s about time we got a result we deserve and I am positive that whatever squad is named for these last two games will give it their all and work hard.”

The energetic midfielder has struggled with injuries and illness this season and after making just ten starts, she is keen to rebuild her confidence and fitness to prepare for 2017.

Dunbar said: “It’s always disappointing being out, watching the team play and not being able to help. As much as I love being in the starting XI however, I would rather I recovered fully from my injuries than playing on and making it worse. I always seem to have a little niggle here and there but this year has been the worst with illness and injuries and it is a season I would like to forget injury wise. I’m looking forward to next season so I can really push on and work hard to get my fitness and confidence back.”