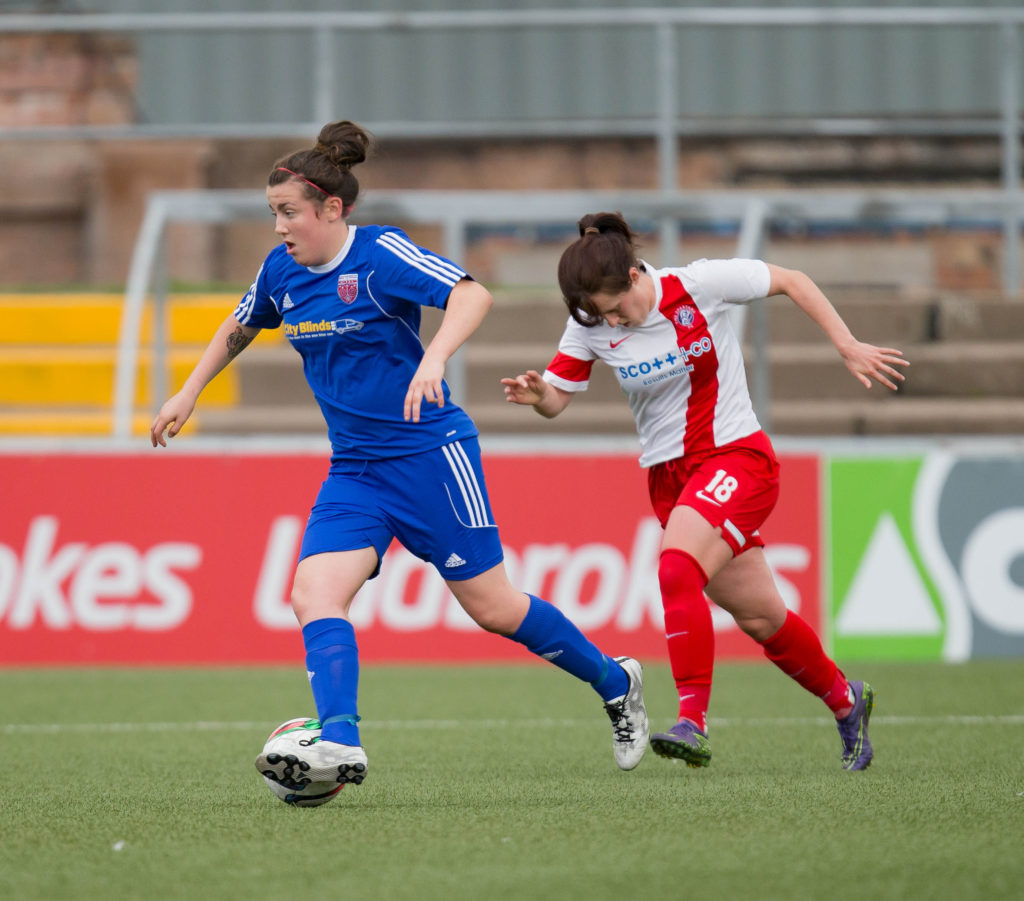 Forfar Farmington face an uphill battle if they are to remain in the SWPL1 after losing out to relegation rivals Aberdeen on Sunday.

Hannah Stewart’s 13th minute deflected goal gave the Dons all three points despite Farmington’s dominance in the second half.

Mark Nisbet’s side were without captain Nicola Davidson, Jade McLaren replacing her while Holly Napier captained the side for the clash.

The hosts had the first chance of the game with Susan Murray’s effort from a Cassie Cowper free kick held after eight minutes.

Amy Gallacher set up Kirsty Deans shortly after but the Aberdeen defence were quick to block her shot.

The only goal of the game came in the 13th minute; Hannah Stewart saw her shot take a deflection before looping over Fiona McNicoll.

Going behind seemed to light a fire underneath Forfar and went close through Julia Scott while Ann Taylor’s run forward ended with her long range shot flying just past the post.

Gallacher blasted over while at the other end Cheryl Anderson should have done better in the 32nd minute, rifling wide when through on goal.

Ten minutes before the break Megan McCarthy had a header saved from a Jade McLaren free kick; the latter close to equalising herself a minute later when Lauren Dawson punched Gallacher’s cross away off the head of the defender.

McCarthy had another header saved on the stroke of half time as Farmington were perhaps unlucky to go in to half time behind.

Forfar began the second half with intent and were close once again to equalising; Robyn Smith setting up Scott who could only volley over the bar.

The hosts seemed to be under immense pressure in the opening twenty minutes, making it past the halfway line a handful of times.

Gallacher hit the side netting on the hour mark after excellent work from herself, Smith and Taylor down the left wing.

Holly Napier fired over from long range before Smith forced a good save from Dawson following a defence splitting ball from sub Lindsey Dunbar.

Farmington seemed to be throwing everything they had at the Dons and came close again when Amy Gallacher’s effort from the edge of the box beat Dawson but cannoned off the base of the post while Smith saw a stab at goal cleared off the line by a desperate defence.

The final few minutes saw Forfar’s eagerness to press almost cost them when a counter attack by Aberdeen saw goalscorer Stewart race clear; her shot hitting the post before the follow up effort cleared by McCarthy.

The result means Farmington are ten points behind the Dons in their fight to survive. Four games remain, meaning they will have to win all of them, including clashes with Hibernian and Glasgow City; it might be a difficult task but as we all know, anything can happen in football.