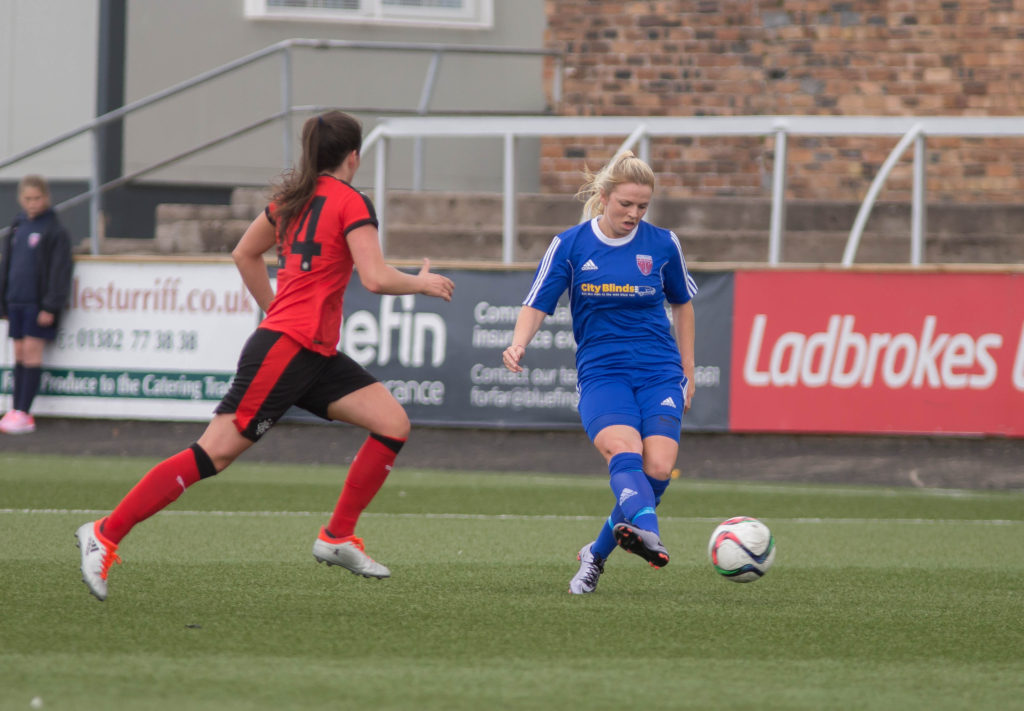 Holly Napier is afraid she has some bad news for Forfar Farmington’s SWPL rivals – the side will refuse to stop battling for survival until there are no more points left to play for.

The midfielder reckons Forfar have what it takes in order to turn things around and avoid relegation with Celtic up first in the final seven games of the season.

20 year old Napier believes Mark Nisbet’s squad have looked sharp in training ahead of Sunday’s clash at K-Park and has full faith in her team mates to take something from the game after running the hosts close in their previous two meetings.

“This week in training has been really great actually, especially Thursday night, we showed exactly what we are capable of. I believe in these girls 100%, we just all need to believe in ourselves for us to start performing in the way we can. We know exactly what it is we need to do from now till the end of the season and the hard work, this week especially, has shown throughout the training sessions.”

She continued: “We should be able to take confidence from every game we play. We know we are not the best team in this league, but we know with our work rate we can give anyone a game; technically when we relax and are patient we are very good! It’s a matter of taking that belief and calmness into a game like situation just like we do in training. I believe we can get something from every game. All we need is the belief and we can get something this weekend there’s no doubt in my mind.”

Napier admits the side weren’t playing to the full potential that they know they can play to in their defeat last Sunday against Stirling University. She said: “The team and I were not 100% sure what it was that happened on Sunday, it was a tough 90 minutes but the game wasn’t one sided. Although we were not playing to our potential at all, the game was still very tight throughout. It was a matter of taking our chances early on and seeing out the game till the end, which is exactly what Stirling ended up doing. Stirling made it hard for us and deserved the 3 points that they got.”

The midfielder was a part of last season’s great escape and insists the side can take heart from that and put it towards recreating a similar effort.

“We know from last season that no matter what situation you’ve got yourself in to, you can get out of it. We won’t stop working until there are no more points to be won. Last season proved that anything can happen, so not one player in this team has given up at all!”

“We believe we can stay up so we will do all we can to make sure that happens. We have amazing players in this team and we are capable of anything that we set our mind to. I love these girls like sisters and throughout this season we have became much closer and we will have each other’s backs on Sunday as well as every other game we’ve yet to play. At the end of the day, we have nothing to lose.”

The side will take on Celtic at K-Park in East Kilbride on Sunday, kick off at the ground is 2:00pm with admission £5 for adults, £3 for concessions while under 16’s enter for free.