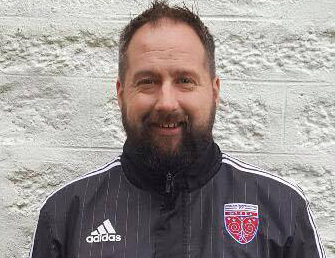 The Club are delighted to confirm the appointment of John Dunn to the role of Development Squad Coach.

As part of the recent re-boot of the player pathway, the club advertised recently for a Development Squad coach and were delighted with the level of interest.

Most latterly Assistant Manager at Forfar Albion, alongside a four year tenure as a Youth Head Coach with Monifieth Athletic, 42 year old Dunn admitted that whilst the opportunity to be involved in the Women’s game was a big draw that he did his research before applying for the post.

“I actually spoke to a few of the parents who I knew had kids at the club, along with (1st team Goalkeeping Coach) Mike Gourlay who I worked with at Forfar Albion, and all the feedback I received was really positive”

“I’d reached a stage in my coaching career were I felt I could do with a new challenge, and when I saw the post advertised, and given the advances that have been made in Women’s Football in the country, it was an easy decision to apply”

Despite only having been in post for a week, Dunn has been delighted with what he has seen thus far. “The standard on and off the park has been exceptional” he admits.

“Things are run on as professional a basis as possible, be it from the initial meetings with Mark (Nisbet) and John (Diplexcito), shadowing some of the first team sessions, or even the recent Summer Camp which I was delighted to help out with.”

“I’ve been made to feel very welcome from all of the management teams, coaches and most importantly the players”

Continuing on the topic of players, Dunn explained that he has a very clear vision on how to apply both the club’s and his own philosophies onto his new charges.

“We have a responsibility to take a group of young players and both educate and develop them in a manner that gives them every opportunity of participating in SWPL fixtures. The girls will be asked to not only work hard in training but to truly express themselves; mindful that the way of play used will mirror that of the current first team.”

“That’s the whole point of a Development Team – to have players both mentally and physically prepared to make a step up to the top level and both the Coaching staff and I are very mindful of that of we move forward.”

“We’ve already seen three girls make that transition successfully this season, so there can be no doubt that there are exciting times ahead at the club, and on a personal level it’s a challenge that I very much welcome.”

John will be supported by the incumbent coaching team of Stuart Cook, Mark Mitchell and Scott Millar.