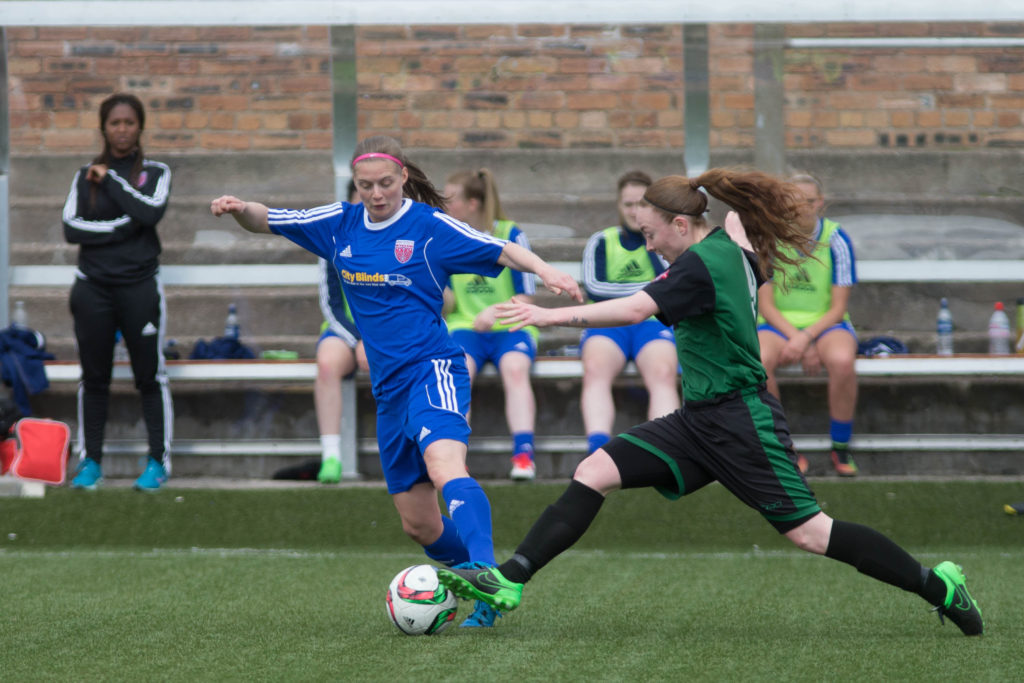 Kirsty Deans expressed her frustration following Forfar Farmington’s failure to net their chances in a 2-0 defeat to Rangers at the weekend.

The midfielder also reckons that there are positives to take from the defeat but the side still need to work hard for their first three points since May.

25 year old Deans felt Forfar were the better side in the first half and if they had taken their chances, it could have been a different story at the final whistle.

She said: “Today was a tough and frustrating game for us. I feel we started brightly in the first half, enjoying good possession and getting balls into the box on numerous occasions, however we just failed to capitalise on those.”

“In the second half Rangers came more into the game and were able to take advantage of two opportunities to take the lead. I feel we played to the game plan pretty well, putting Rangers under pressure and that is a credit to the work rate that all the girls put in and that is something we will definitely be able to take forward and build on.”

The former Inverness City midfielder was playing for the first time in two months following an ankle injury and some time working in America and Deans spoke of her delight at being back on the field in a Forfar shirt after so long.

“It was great to be back in a Forfar shirt today, having not played in eight weeks I was eager to get back into the squad and get minutes under my belt again. Returning to work in America as a waterski instructor probably came at a good time for me as it allowed my ankle to get some rest and I was then able to focus on the rehab without having the temptation to do too much at training with the girls. After today’s game though I am very much looking to build my fitness and sharpness back up and continue to challenge for a spot in the starting 11.”

Deans also reckons the squad has a fantastic bond and while times are tough for them, that bond will help them battle together to overcome the odds.

“The team does have a great bond together and that is a strength we are looking to use to get some much needed points on the board. Everyone wants to work for each other and do well for the club and this will be essential for us as we get to the end of the season.”

She continued: “We just need to take this onto the pitch, show the graft we demonstrated today, communicate well with each other and we will create opportunities.”

Farmington now travel to face fellow relegation rivals Stirling University and Deans knows that the side will have to take points if they are to have any hope of avoiding the drop to SWPL2.

Deans said: “The whole squad knows that we must take the points back to Forfar this weekend. Sunday has further increased the team’s hunger and everyone is determined to get a solid week on the training pitch in so that we can go into Sunday’s game with confidence along with the fight. We are under no illusion that Stirling will come out full of confidence after a win this weekend against Aberdeen and it is up to us to work harder, be stronger and earn the result that we want on Sunday.”