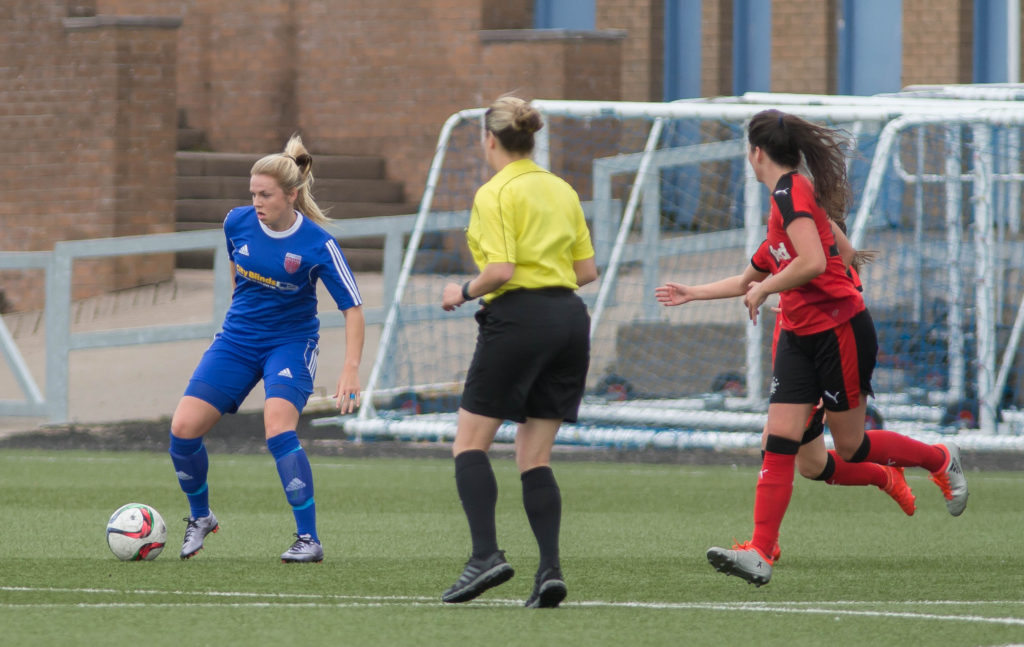 Despite improving performances, Forfar Farmington fell to another defeat in the Scottish Women’s Premier League as Rangers left Station Park with a 2-0 victory on Sunday.

Second half goals from Katey Turner and Sarah Robertson punished Forfar after they failed to put away their own chances.
With Alana Bruce and Amy Gallacher unavailable, Kirsty Deans played for the first time in two months following an injury while Beth Shillitto was handed her first start for the Premier League squad.
Farmington had the first chance of the game four minutes in through captain Nicola Davidson however her long range effort flew wide of the mark.
The visitors could and probably should have scored in the 11th minute when Lisa Swanson beat the offside trap but the striker scooped her shot over the bar from a couple of yards.
Shortly after, Rhonda Jones and Chantelle Brown both saw efforts land in the Market Muir terracing in quick succession.
Forfar began to take charge of the game and looked more likely to score; Gemma Collier stinging the palms of keeper Jordyn Elliot before Megan McCarthy’s header from a Julia Scott corner landed just past the post with Elliot beaten in the 24th minute.
Ten minutes later Scott caused problems for the away defence, weaving her way in to the box to set up Shillitto but the keeper was able to smother the ball before she could get a shot away.
Turner had another strike held by Fiona McNicoll shortly before half time while Scott saw her free kick held by Elliot five minutes before half time.
The dangerous Turner forced a great save from McNicoll in the 52nd minute as Rangers attempted to force an opener while at the other end Davidson rifled over from just outside the box.
The visitors did take the lead in the hour mark, a long ball wasn’t dealt with by the Forfar defence and Turner nipped in to round the keeper and slot home against her former club.
Farmington looked for a quick equaliser and came close in the 70th minute when McCarthy’s header from a Davidson free kick was saved by Elliot.
Four minutes later and Forfar were to pay again for failing to net while on top of the game; a Jordan McLintock shot was pushed on to the post but Sarah Robertson was on hand to bundle home the rebound.
Rangers were more than happy to sit back and frustrate the Farmington attack following this and finished the game with a clean sheet and all three points. Farmington now look to take something from their match against relegation rivals Stirling University when they visit them this Sunday.
Fiona McNicoll, Ann Taylor, Jade McLaren (Sophie Milligan 60), Megan McCarthy, Gemma Collier, Nicola Davidson, Holly Napier, Kirsty Deans, Beth Shillitto (Robyn Smith 55), Louise Magilton (Caitlin Mitchell 77), Julia Scott.
Subs not used: Kayleigh Noble, Lindsey Dunbar, Erin Cattanach.
Match photos: http://davidyoung.photoshelter.com/gallery/14-08-2016-Forfar-Farmington-v-Rangers-Ladies/G000051SBC8lqed8/
Match highlights: https://www.youtube.com/watch?v=1ApAk-9oVP4
Post Match with Head Coach Mark Nisbet: https://www.youtube.com/watch?v=XC8gn5ysrXs