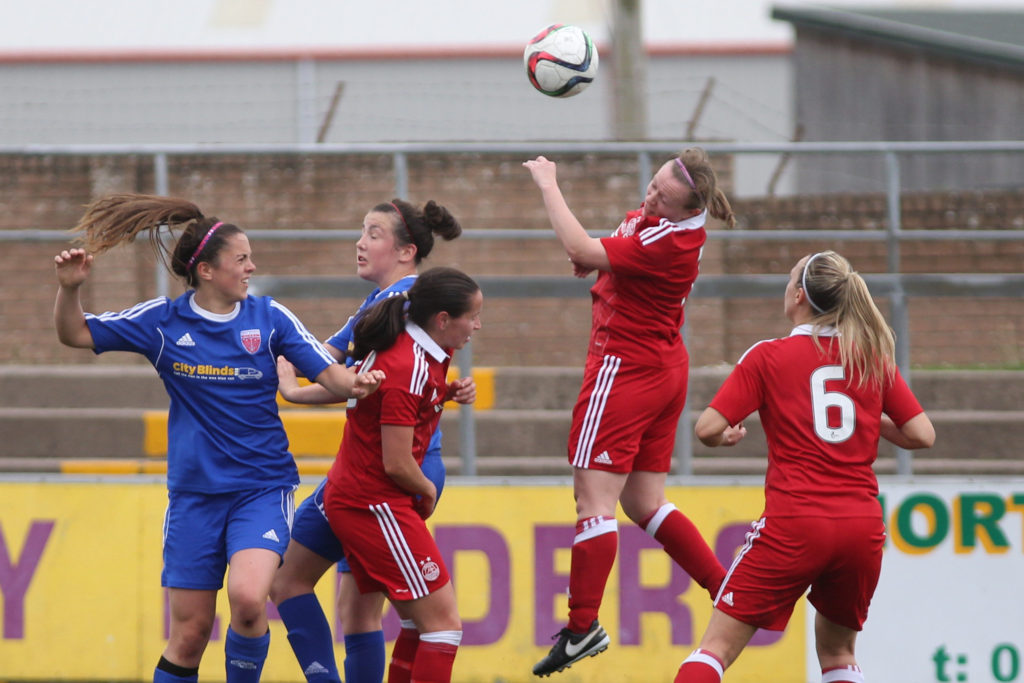 Forfar Farmington’s disappointing league form continued with a 3-0 defeat to Aberdeen at Station Park on Sunday.

Two goals in the first five minutes from Cheryl Anderson and Hannah Stewart put the Dons in front with Anderson completing the scoring midway through the second half.

Five changes were made from the Scottish Cup victory over Buchan with Fiona McNicoll, Megan McCarthy, Julia Scott and Jade McLaren returning to the starting squad. Tori Sousa also returned to the team in what was to be her final game for the club before departing back to America.

The game was less than two minutes old when Aberdeen took the lead; a through ball found Loren Campbell and she sent a cross across the face of goal for Cheryl Anderson to sweep home at the back post.

Farmington looked for a quickfire equaliser when Alana Bruce’s long ball found Robyn Smith inside the box but the winger’s effort was deflected wide by a defender.

Just five minutes in to the game and the Dons were two goals ahead when Hannah Stewart beat Fiona McNicoll to a long ball and flicked it over her into the empty net.

Forfar had chances of their own in the first ten minutes with Sophie Milligan volleying over from a Julia Scott corner before Tori Sousa dragged her effort wide of the mark.

Chloe Fitzpatrick nodded wide for the visitors in the 13th minute but eight minutes later they should have been further ahead; a poor pass allowed Stewart in on goal and after beating McNicoll could only watch as Sophie Milligan made a phenomenal effort to race back and knock the shot on to the post before it was cleared.

Sousa came close to a final goal for the club in the 35th minute when she curled a free kick from the edge of the box towards goal but Dons keeper Becky Flaherty did well to push the effort wide.

Two minutes in to the second half and Farmington went close again; Megan McCarthy’s ball into the box fell to Lindsey Dunbar but her effort was blocked and Flaherty managed to gather the loose ball just before Milligan connected.

The game seemed to quieten down in the second half with Aberdeen more than happy to sit in and hold their lead. The 68th minute almost saw a carbon copy of Ann Taylor’s goal against Buchan, Davidson sprayed the ball out to the right back and she saw her long range effort land on the roof of the net with Flaherty beaten.

Anderson and Fitzpatrick both tested McNicoll in quick succession while Gallacher had her effort deflected wide in the 71st minute. The corner was cleared by Aberdeen and a counter attack began that led to their third.

Cheryl Anderson made her way in to the box and after her original shot was parried by McNicoll, Bruce attempted a clearance across goal but the striker was quick to jump in front and her deflection diverted the ball in to the net for her second of the afternoon.

Farmington went in search of a consolation late on but the closest they came to this was from Julia Scott’s tame strike at Flaherty.

The results means the gap between Aberdeen and the bottom two of Forfar and Stirling University is extended to four points and Forfar have a tough game this Sunday when they travel to face Hibernian in the final SWPL game before the summer break.