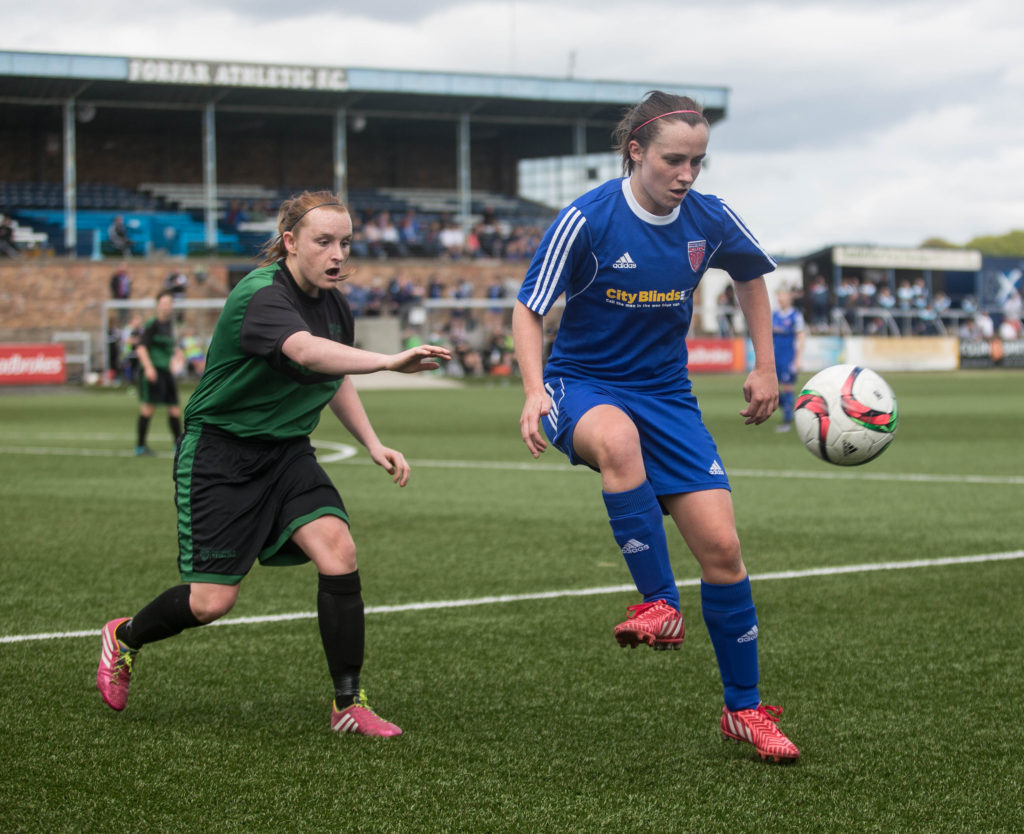 Forfar Farmington advanced to the third round of the Scottish Cup after making hard work of defeating Buchan at Maud Pleasure Park on Sunday.

After Robyn Smith gave the SWPL1 side the lead, Buchan raced into a 3-1 advantage however Amy Gallacher and Ann Taylor levelled the scoring before half time. The game went into extra time after no further goals with Kirsty Deans and Smith’s second sealing a hard fought 5-3 win.

Head Coach Mark Nisbet made seven changes from the defeat to Spartans a fortnight prior to the tie; notably Hannah Dryden, Kayleigh Brough and Stephanie Milne making their first starts of the season. Alana Bruce, Robyn Smith, Kayleigh Noble and Kirsty Deans were the remaining four who started, the players they replaced all dropping to the bench bar Tori Sousa who was unavailable.

The visitors had the first chance of the game after just four minutes; Ann Taylor linking up well with Sophie Milligan and the latter’s cross found Noble but her header flew over.

Eight minutes later Alana Bruce fired straight into the arms of keeper Jodie Kennedy while Leanne Reid sent a free kick over at the other end.

Forfar took the lead in the 17th minute when poor defending by Buchan ended up with a clearance bouncing off Noble and the ball found Robyn Smith who nodded home under the keeper.

Just three minutes later the scores were level after a long ball from the Buchan defence found Louise Brown and the striker raced clear of the defence before firing past Dryden.

It was Brown who was found with another long ball in the 27th minute, this time the striker’s effort going in off the post to give the hosts the lead.

They extended their lead two minutes later through Reid when she curled home from the edge of the box.

Forfar reduced the deficit shortly after Buchan’s third with Noble swinging a cross in for Amy Gallacher to fire home.

Less than three minutes after the second Forfar were level through an Ann Taylor goal; her cross into the box was misjudged by the keeper and flew into the top corner – Taylor will no doubt claim the intention was always to go for goal.

That goal capped off an incredible eighteen minutes that saw six goals with just under an hour remaining.

Taylor felt lucky after her equalising goal and in the 38th minute attempted to score against her former club again from long range with an effort that dipped over the bar.

Alana Bruce almost netted with a cross of her own less than sixty seconds in to the second half but the ball fell just inches from the goal line and was cleared by a defender.

Nicola Davidson was next to go close in the 48th minute after being set up by Kirsty Deans, her effort going inches over with Kennedy beaten.

Davidson turned provider shortly after the hour mark when she sent Smith clear; the attacker made her way to the edge of the box before dragging her effort wide of the mark.

The rules of the Scottish Cup state the games must be played to a finish so the game went to extra time with the teams sharing six goals.

Eight minutes into the first half of extra time and Forfar took the lead after being 3-1 down previously; Holly Napier’s run down the left ended with her finding Julia Scott who laid the ball off for Deans and the ex-Inverness midfielder fired home after deceiving the defence.

Scott curled wide with a chance of her own before Farmington had the ball in the net again in the 101st minute. Jade McLaren made her way into the box before cutting the ball back for Holly Napier to stab home. Unfortunately for Napier the referee ruled her to be offside despite the assistant referee appearing to think otherwise.

Napier had another chance in the 107th minute after being sent through on goal by Davidson but the Buchan keeper turned her shot wide.

Robyn Smith delivered Buchan a coup de grace two minutes later after Megan McCarthy weaved her way past four defenders before driving the ball across goal for Smith to tap in and send Forfar through to the third round of the Scottish Cup.