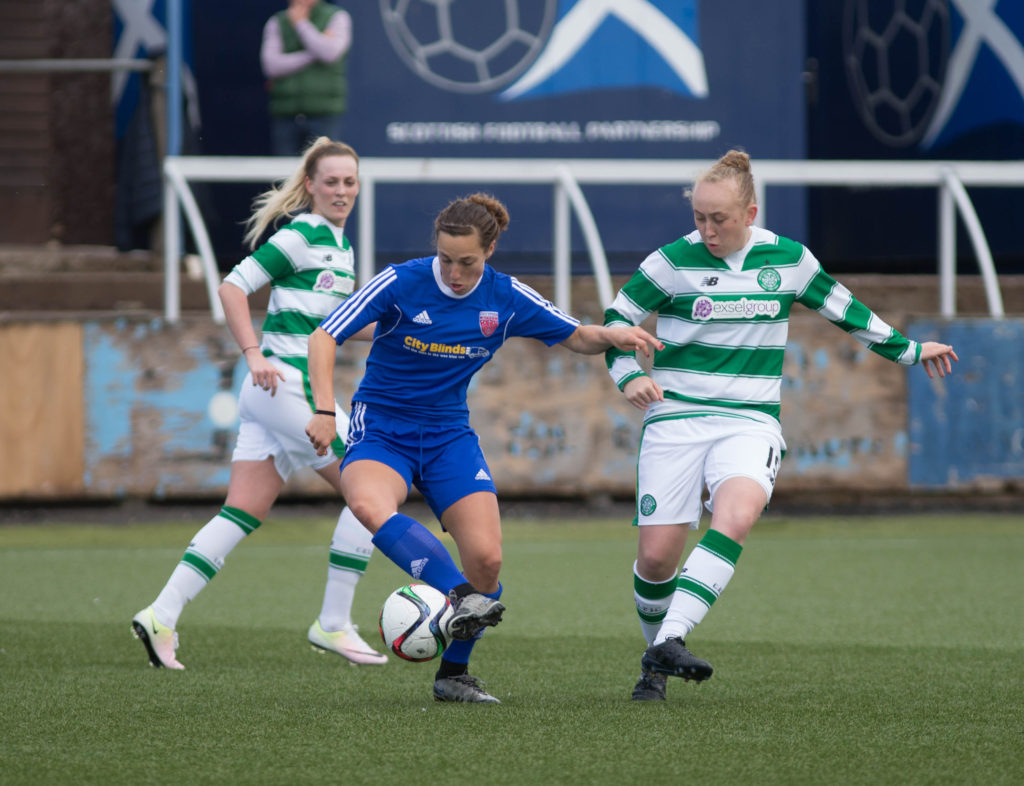 Forfar Farmington were edged out in a five goal thriller against Celtic on Sunday and can be disappointed not to have taken anything.

Despite going behind through a Kirsty Howat goal, Jade McLaren and Tori Sousa put Forfar ahead but it was the visitors who took all three points following Chloe Craig and Suzanne Mulvey’s goals.

In what was Forfar’s third game of the week, Mark Nisbet made three changes from the side who defeated Aberdeen on Wednesday; Megan McCarthy, Amy Gallacher and Holly Napier replacing Alana Bruce, Robyn Smith and Gemma Collier.

Celtic had the first chance of the game just three minutes in however Kirsty Howat could only fire straight at Fiona McNicoll.

Howat managed to open the scoring in the twelfth minute after McNicoll was slow to race out and the winger slipped the ball past the keeper.

Christie Murray looked to have a great opportunity to add to their lead four minutes later but the Scotland internationalist dragged the shot wide.

Amy Gallacher had Farmington’s first shot on goal midway through the first half when she was set up by Tori Sousa; the attacker let fly from just outside the box but watched as it went over.

The ever dangerous Howat found the arms of McNicoll with a strike from close range just before the hour mark while the other end saw another chance for Gallacher minutes later. Ann Taylor’s pass found the attacker and after a quick one two with Sousa, Gallacher’s shot was parried by Keira Gibson before being held.

Forfar managed to grab an equaliser six minutes into the second half; Jade McLaren rising to thunder home a header from Julia Scott’s corner and just three minutes later Farmington were ahead.

Megan McCarthy sent a long ball into the box and after being half cleared Holly Napier nodded it back into the box where Tori Sousa pounced on slow reactions by the Celtic defence to prod the ball under Gibson.

Celtic were awarded the opportunity to equalise in the 57th minute when the referee adjudged Farmington to have pushed a Celtic player inside the box. Chloe Craig stepped up and fired the spot kick past McNicoll.

The game seemed to be end to end with both sides eager to find a winner; Courtney Whyte and Holly Napier seeing efforts go wide of the mark within minutes of each other.

Kerry Montgomery looked to have possibly put Celtic back in front in the 72nd minute when she rose to meet a Murray cross but McNicoll made a fantastic point blank save to deny her.

Three minutes later the ball was in the back of the net for the fifth time; a counter attack from the visitors allowed substitute Suzanne Mulvey to race clear of the Forfar defence before placing the ball in the bottom corner.

Forfar had one final chance to equalise from another corner but Sousa could only head wide as Celtic took all three points.

The side now look to bounce back from the defeat while continuing their string of good performances when Spartans come calling next Sunday.