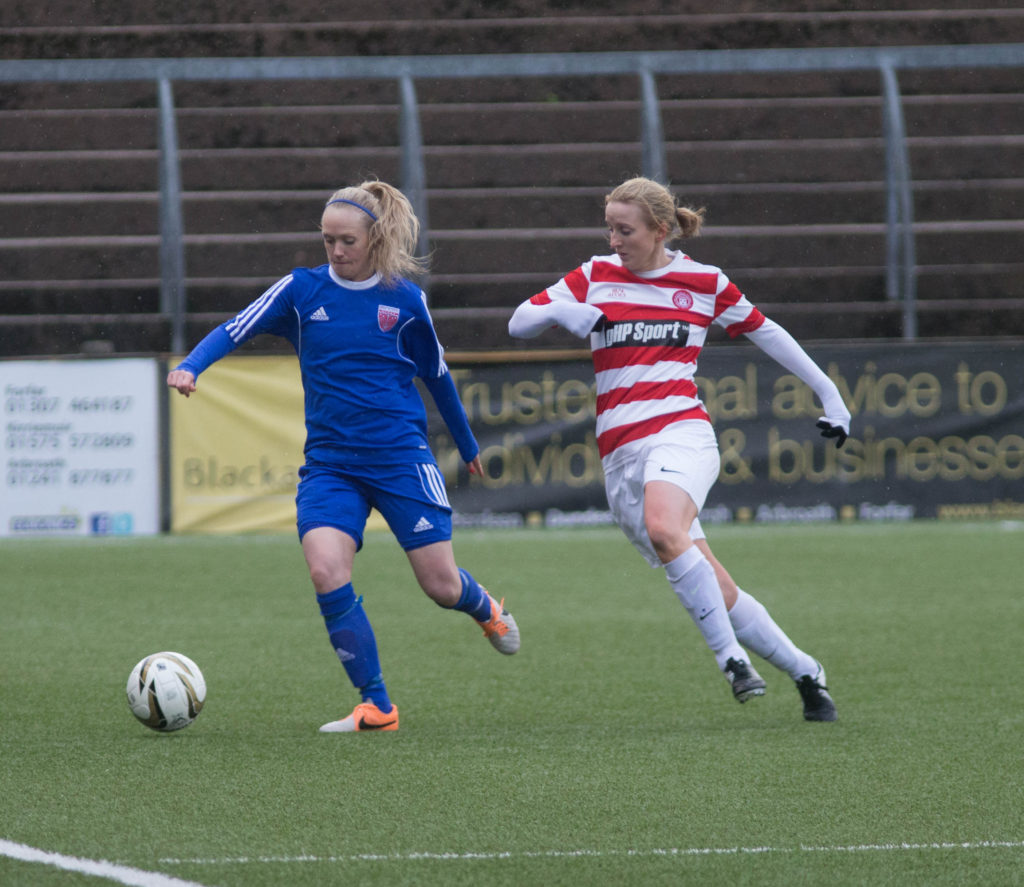 Goals in the first half from Lindsey Dunbar and Julia Scott lifted Forfar Farmington off the foot of the table into sixth after their 2-0 win over Aberdeen on Wednesday.

Dunbar opened the scoring after a quarter of an hour before Scott doubled the advantage on the stroke of half time giving Forfar their second win in a row.

Tori Sousa had the first opportunity of the game in the sixth minute when she beat Becky Flaherty to a high punt from Jade McLaren but her header flew past the post.

Aberdeen had a chance of their own three minutes later through Donna Paterson’s long range effort; her shot going wide of the mark.

On the quarter hour mark Farmington opened the scoring when Julia Scott’s corner was met by Sousa and after her header rattled the crossbar Lindsey Dunbar was on hand to force the ball home.

Aberdeen looked to get back into the game with a corner of their own in the 23rd minute however Melissa Aitkenhead’s header was off target.

Mark Nisbet was forced into an early change when Alana Bruce limped off to be replaced by Kirsty Deans after half an hour.

There was little to write about in the latter stages of the first half and it looked like Forfar would go into the break with a one goal lead until the first minute of stoppage time.

Pressure on the Aberdeen defence led to a passback to Flaherty but her kick was poor and Robyn Smith was able to capitalise by sending a quick cross in to the unmarked Julia Scott and she was more than happy to send the ball into the empty net.

Eight minutes into the second half and Forfar was so close to adding a third. An excellent counter saw Sousa feed in Scott but Flaherty raced out to deny her; the ball fell to Deans and her lob was cleared as far as Scott who sent a cross into the box for Sousa to head down for Deans but the midfielder could only volley agonisingly past the post.

Paterson tested McNicoll again but her effort was held before Chloe Fitzpatrick chested wide from a Hannah Stewart cross.

Sousa and Smith combined on the right wing again, causing Aberdeen problems outside their box but when Smith’s effort was blocked Nicola Davidson rifled over the bar.

The 63rd minute saw Aberdeen’s best chance of the game, Nikki Smith smashing a volley towards goal from close range but McNicoll pulled off an excellent save to deny her.

Seven minutes later Davidson sent a cross into the box after forcing her way past defenders and it seemed to just be too far away for Sousa to get a proper effort on goal as she stabbed the ball wide.

With fifteen minutes left Forfar looked determined to get a third to kill the game and after racing onto a poor pass back to the keeper Smith could only watch as her lob floated into the sidenetting.

Chances at either end late on saw Scott and Cheryl Anderson send their respective efforts wide. The final whistle went meaning Farmington had won their second game in a row and as a result moved up to sixth in the table above the Dons and Stirling University.

They will now hope to capitalise on this momentum when they host Celtic this Sunday at Station Park.