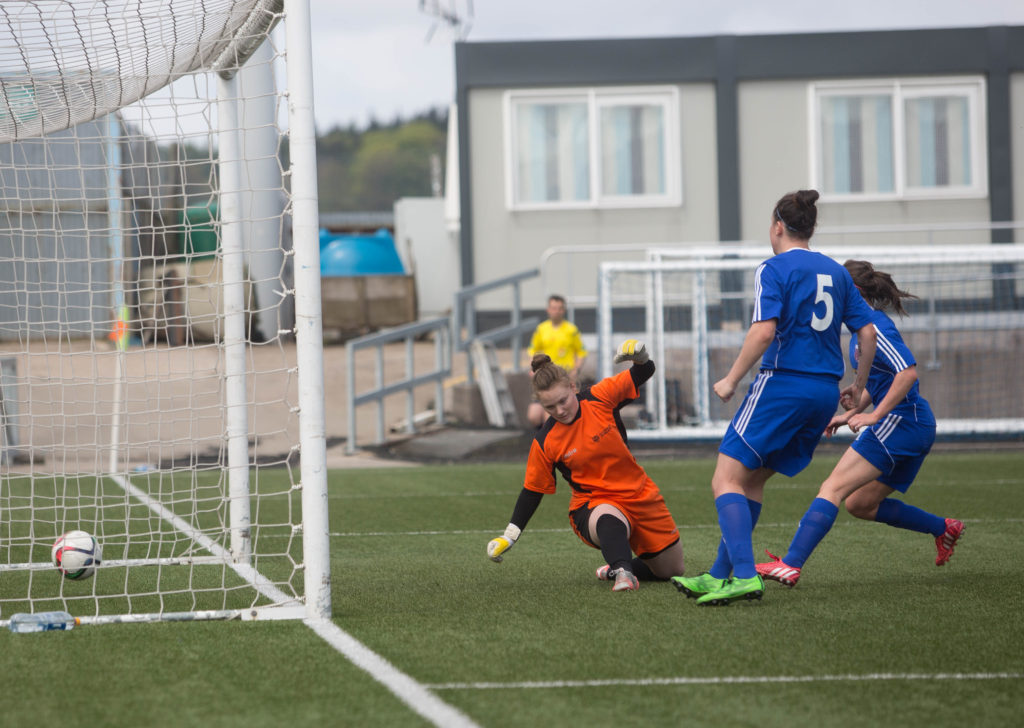 Forfar Farmington grabbed their first three points of the season with a deserved 2-0 win over Stirling University on Sunday.

After a goalless first half where Forfar should have went ahead, Holly Napier and Tori Sousa netted to earn Mark Nisbet’s side their first league win.

Nisbet made five changes from the defeat to Rangers a fortnight ago with Gallacher, Dunbar, Davidson, Milligan and Noble dropping to the bench while McLaren, Bruce, Collier, Smith and Scott started. There was also a spot for new signing Kayleigh Brough, the defender recently returning from a spell in America.

Farmington almost opened the scoring inside the first sixty seconds; poor defending allowed Tori Sousa into the box and she rounded the keeper but the angle was too tight to slot home and her shot was blocked by a defender.

Sousa nodded over following a Julia Scott three minutes later before Robyn Smith almost scored when her cross slipped under Logan but the keeper managed to scramble and gather the ball on the line.

In the sixth minute Sousa had yet another opportunity to score but the in-form attacker could only drag her shot past the post.

Scott and Sousa looked to be combining well along with Smith; in the fourteenth minute Jade McLaren played a ball forward and Sousa’s flick on allowed Scott to race between two defenders however her effort was held by Logan.

Two minutes later Stirling had their first chance; Jade Gallon’s corner was headed out as far as Kerry Kennedy but her shot flew over the bar.

Gallon sent a free kick into the arms of McNicoll whilst at the other end Sousa set up Scott again with the winger firing inches wide.

In the 22nd minute Scott made her way down the wing before her cross was knocked on by Smith, Sousa unfortunate not to connect with the ball.

Rachel Donaldson forced a save from McNicoll in the 25th minute as Stirling looked to try and break through the Forfar defence.

Twelve minutes later Scott sent the ball into the box and after Napier nodded it back into the six yard box Sousa saw her shot cleared off the line by a joint effort from Lauren Gallon and Demi Falconer.

McLaren had the final chance of the first half but she could only head wide from Napier’s free kick.

Farmington opened the scoring just three minutes after the restart, Sousa made her way towards the box with a drive at the defence and after enticing the defenders towards her she threaded the ball to the unmarked Napier who slotted home from 18 yards.

The game seemed to be a midfield battle for the majority of the second half, with the only other action of the first 25 minutes coming when Stirling’s Donaldson blasted wide.

The hosts doubled their lead in the 73rd minute following some poor kicking from Logan; Lindsey Dunbar latching onto her kick before spraying the ball out to Scott and her cross was bundled home by Sousa for her third goal in the last three games.

Forfar had the ball in the net again three minutes later when Smith knocked home Scott’s free kick but the referee disallowed the goal, causing confusion in the stand and in both dugouts as to why.

Sousa almost netted her second shortly after but could only head wide after connecting with a Smith cross.

Dunbar was next to nod wide, excellent work from Smith and Scott creating the opportunity but the substitute’s header was inches wide of the mark.

Nicole Pullar fired straight at McNicoll following a quick free kick as Stirling showed they were not giving up just yet.

Dunbar had another chance with three minutes left; collecting a poor clearance but her long range strike flew past the post.

The final chance of the game fell to Sousa again when she weaved her way into the box only for her strike to be parried by Logan before being cleared.

The result means Forfar have their first three points of the season and will look to build on that when they travel to face Aberdeen at Heathryfold Park on Wednesday.