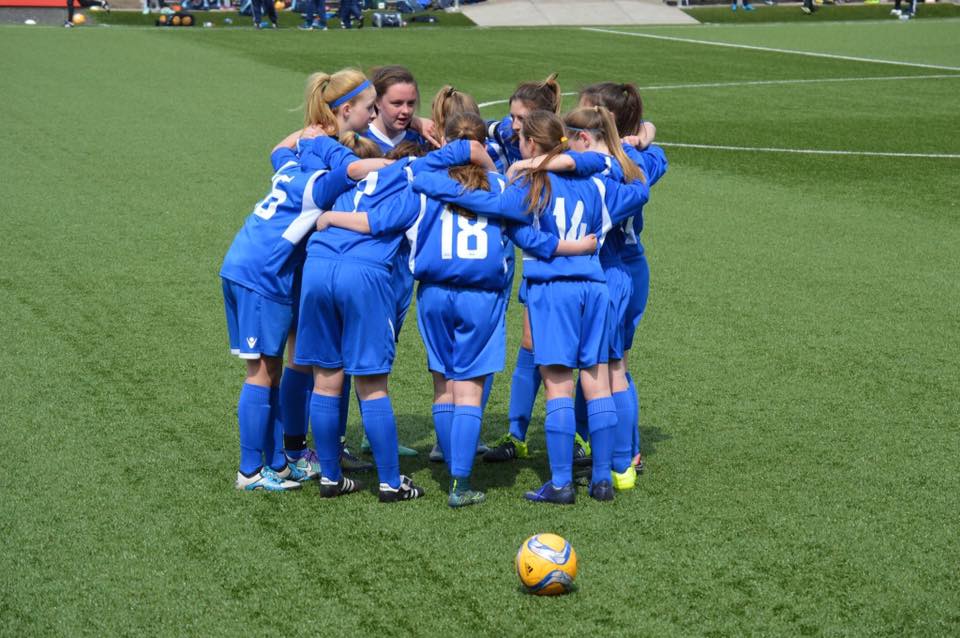 The season so far has seen the girls from Forfar Farmington U15 score a number of goals with no reply however today’s opponents from Jeanfield proved to be a different proposition as their established team provided a stern test as they held our girls to a keenly contested and entertaining 2-2 draw. The past few reports have mentioned players who have provided a lot of attacking threat however all performances so far have been whole team efforts and today’s challenge would highlight even more the immense contribution that came from AJ Meach in goal, through to the defending of Skye Hutcheon, Melissa Coull, Katie Whyte and the midfield drive of Eve Warden – a contribution that would continue to play its part if Forfar were to come away with a positive result today.

The early stages saw Forfar look the more threatening with the combination of Neve Guthrie and Phillipa McCallum on the left hand side causing the Jeanfield defence some difficulty, Aimee Robertson almost broke the deadlock when she played a one-two with Taylor Clifford that saw her get past the Jeanfield rearguard only for her angled goal-bound drive to be stopped by an excellent block by the opposition keeper. A perfectly weighted through ball from Phillipa McCallum released Aimee Robertson who outstripped the Jeanfied defence only to be brought down by their keeper. The referee decided to take no action as a result of this goal scoring opportunity being denied other than awarding a free kick on the edge of the box. Philippa McCallum took the free-kick but fired it just over the bar.

The first goal eventually arrived and it was Forfar who took the lead. A quick break from midfield saw the ball played out to Neve Guthrie whose fantastic driving run down the left hand side left her with only the goalkeeper to beat however her shot was palmed across goal by the keeper only for Aimee Robertson to react the quickest to stroke the ball into the empty net. 1-0 to Forfar! Jeanfield stepped things up after this setback and although AJ Meach kept out some long range efforts she couldn’t do anything to stop a drive into the roof of the net from a Jeanfield attacker who managed to latch on to a speculative long ball over the top of the Forfar defence.

The second half proved to be as competitive as the first and it was Jeanfield that looked the more likely to score in the early stages as they pressed the Forfar defence. AJ Meach pulled off a couple of great saves as the visitors looked to get their noses in front however she couldn’t stop a 25 yard screamer that hit the inside of the post as it flew into the net to put the visitors 2-1 ahead. The girls from Forfar did not lie down however and after a goalmouth stramash ended with another superb stop from AJ Meach they hauled themselves back into the game and looked to get the scores level. Long range efforts from Taylor Clifford, Philippa McCallum and Kacey McCabe came close but an equaliser came late in the second half with a beautiful goal. Aimee Robertson picked up the ball from a throw in and showed great awareness to turn quickly and hit a lovely cross field pass into the path of Neve Henderson who strode forward to pick the ball up before placing the ball wide of the keeper and into the net! Neve then almost snatched a winner in the dying seconds but fired just wide.

An exciting match that could have gone either way and that was played in a competitive and spirited manner. The return league match in Perth will be one that will no doubt be just as close as today’s. On to the next match though for Forfar with some real positives to take from today’s showing.