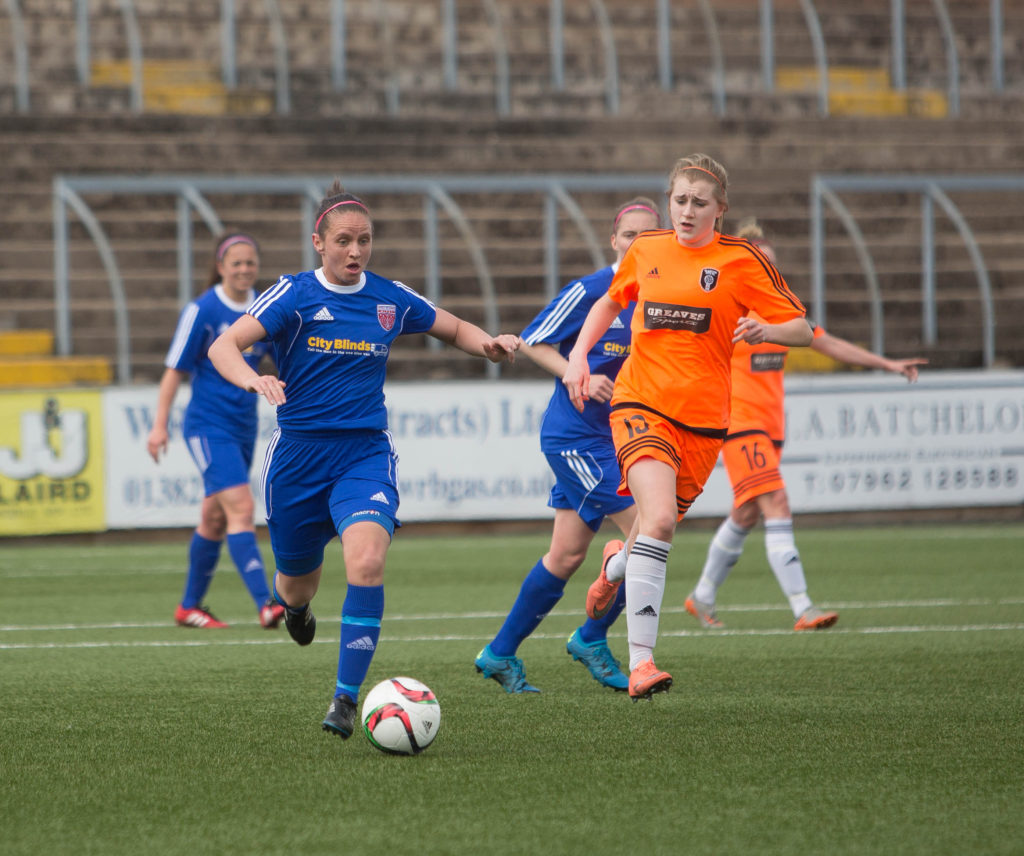 Forfar Farmington continued their improved performances as of late when they were edged out 4-2 by defending SWPL champions Glasgow City on Sunday.

Despite goals from Tori Sousa and Nicola Davidson, the result leaves Farmington still hunting for those ever elusive first points of the season.

Two changes were made following last week’s defeat to Hibs with Louise Magilton ruled out through injury and Alana Bruce dropping to the bench to be replaced by Holly Napier and Kayleigh Noble.

City took the lead after just six minutes when Samantha Kerr and Ruesha Littlejohn combined to send a ball into the box for Fiona Brown to sweep home.

Littlejohn had an opportunity of her own in the 15th minute to double the advantage but blasted wide.

Just sixty seconds later however Forfar had equalised; a free kick from long range caused havoc inside the box and Tori Sousa was on hand to slot past the keeper for her second of the season.

Kirsty Deans couldn’t get a strong enough touch on Kayleigh Noble’s cross to divert it towards goal while Lindsey Dunbar was crowded out before she could get a shot away after weaving her way through the City defence.

Littlejohn volleyed into the arms of Fiona McNicoll before she nodded straight at the keeper after rising to meet a Brown cross just after the half hour mark.

Nicola Docherty restored City’s lead five minutes from half time with a smart finish; curling past McNicoll from a tight angle.

Captain Nicola Davidson almost equalised once more straight away with a long range effort that troubled the keeper but she managed to smother the shot.

Shortly after half time Megan McCarthy made a great run to deny Docherty as she made her way into the box but City were to add another goal in the 53rd minute.

Leanne Ross swung a corner in that was met by the head of Brown, giving McNicoll no chance.

Just three minutes later Farmington were back in the game when Kayleigh Noble’s cross was collected by Davidson after beating a static defence and chipping the ball past the keeper.

In the 64th minute Holly Napier was close to equalising with a smart free kick that flew agonisingly over the bar.

Forfar were dealt another blow in the 67th minute when City added their fourth to restore their two goal lead; Sarah Crilly bundling home Brown’s cross at the front post.

Farmington tried to push for another deserved goal for their performance but were unable to break down a City defence, who were more than happy to sit in.

The visitors did have chances through Ross and Kerr but neither were on target.

Farmington can be more than happy with their performance despite the result having played as well as the league leaders for the majority of the game.

They will now look to go one better and pick up points when they travel to face Rangers next week.