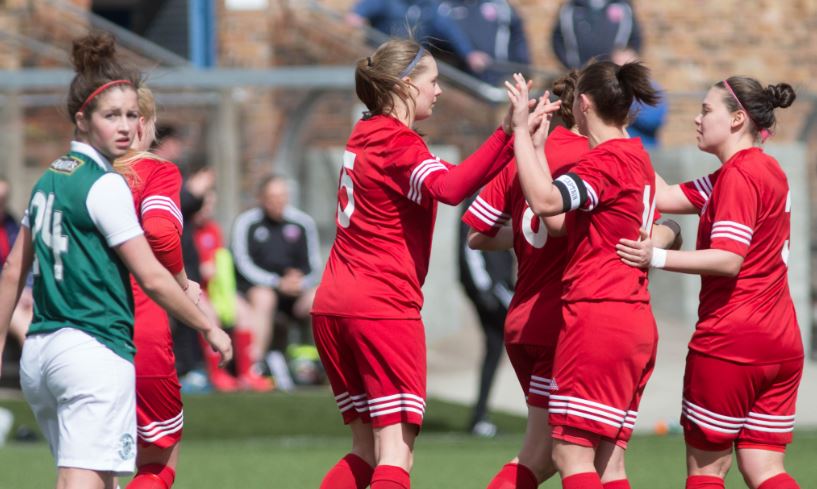 Forfar Farmington could be pleased with their performance despite a 3-1 defeat to title challengers Hibernian on Sunday.

The two sides met just three weeks ago in the League Cup with Hibs triumphing 6-0 however this meeting was a closer affair.

Kirsty Deans netted her first goal for Farmington with a fantastic volley into the top corner with Lizzie Arnot, Lucy Graham and Caroline Heron grabbing the visitors’ goals to take all three points.

Head coach Mark Nisbet made five changes from the crushing defeat with Louise Magilton, Lindsey Dunbar, Megan McCarthy and two second debuts for Alana Bruce and latest signing Ann Taylor coming in. This meant that Holly Napier, Jade McLaren, Gemma Collier and Robyn Smith dropped to the bench with Julia Scott missing out due to illness.

Hibs got off to a perfect start after three minutes; Lizzie Arnot curling home past Fiona McNicoll from the edge of the box.

Tori Sousa almost grabbed an equaliser eight minutes later after racing onto a long ball from Bruce but the attacker couldn’t keep her effort down and it flew inches over the bar.

Farmington had their closest chance of the first half in the 24th minute when Taylor swung a corner into the danger zone and McCarthy’s header struck the crossbar with Jenna Fife beaten.

The Edinburgh side had headers of their own go close in quick succession; Lucy Graham nodded wide from Arnot’s corner before an unmarked Joelle Murray did the same following Lisa Robertson’s free kick.

Shortly after the half hour mark Taylor sent a free kick flying over Fife’s bar and following a quick attack by Hibs Arnot fired straight at McNicoll.

The visitors did double their advantage four minutes before half time when a poor clearance teed up Graham perfectly and her driven effort found the bottom corner.

Forfar came out for the second half looking for a quick goal to bring themselves back into the game and almost got a goal within the first sixty seconds; Amy Gallacher sending her effort wide of the mark.

The side were then dealt a blow when Louise Magilton was stretchered off shortly after Gallacher’s effort.

Hibs made sure things went from bad to worse for Farmington in the 58th minute; former duo Abbi Grant and Caroline Heron combined to allow the latter to stab home and make it 3-0.

Forfar however, were determined not to give up and kept fighting to get some reward for their neat play; Nicola Davidson saw a free kick cleared before Alana Bruce was inches away from firing home but was crowded out by a well organised defence.

The side did eventually find the net in the 69th minute when Tori Sousa took a cross down before Kirsty Deans hit a fantastic first time volley that soared into the top corner, giving Fife no chance.

McNicoll was then called into action once more, pulling off two impressive saves following close range efforts from Arnot and then Heron inside the six yard box.

At the other end Sousa saw her low effort pushed wide before the resultant corner from Taylor found McCarthy but her header was soft and the defence cleared with ease.

McNicoll was in fine form once more with another double save from Robertson and Rachel McLauchlan, albeit the efforts were from further out than the previous two.

In the second minute of added time Forfar had a chance to make things interesting in the final five minutes of the game with Sousa and Deans combining to set up Davidson; her effort was held by Fife.

The result means Forfar are still without a point in the league but their performances are improving and they will hope for another like that when they entertain Glasgow City this Sunday at Station Park.

Report by Lee Smith of Ramblings of a Loon