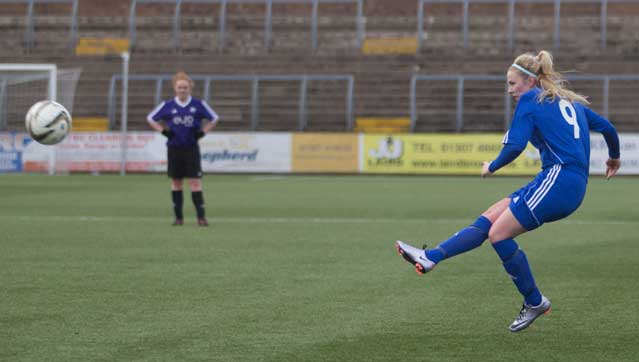 Midfielder Holly Napier says that she can’t wait to get the season underway on Sunday when Forfar Farmington travel to take on Hearts in Dalkeith.

The 20 year old vice captain also spoke of her delight at the return of Tori Sousa after their perfect chemistry on the field last year.

Speaking ahead of Sunday’s game, Napier believes that the preparation from Mark Nisbet’s squad has gone fantastically for them, with everyone eager to get going.

“Preparation for this game has been very clear and we know exactly what it is we need to do this weekend. We have had a handful of games together and in each and every game we have played, there has been an improvement both individually and as a team.”

She continued: “We are all starting to work together and get used to each other’s way of playing. The bond this team has on and off the pitch is great and it’s starting to show in our performances leading up to the season starting.”

The side have been in top form throughout pre-season; scoring sixteen goals in three games while conceding just one. Holly feels that although pre-season has been difficult for everyone it has made the squad stronger and reckons they are more than prepared for the season ahead.

She said “Pre season has been tough for everyone however we all know that we are in a great place now because of it. Both technically and physically we are strong and I truly believe this will become an advantage for us this season. From the very beginning we know what it is we have set out to do and we will make sure that it is fulfilled.”

Napier rejoined Forfar in 2014 following a year in America with Martin Methodist Redhawks and after netting five goals while grabbing five assists, she hopes to improve on that in 2016. “On a personal level I would love to continue playing as much as I did last season. I would love to secure a starting position again and be able to maintain this throughout the whole season. A few more goals and assists wouldn’t be too bad either!”

Last week saw the return of Tori Sousa from America and after impressive performances alongside each other last season, Napier is pleased to see her back in a Forfar shirt.

“I’m delighted to have Tori back; we are both very similar players so I think that’s why you could say we link up well together. I always know where she is on the park so she’s someone that’s very easy to play alongside.”

“The whole team are starting to get used to each other and finding out exactly what each player is like individually in training and in our games. Each and every person in this team hold their own and we all have each other’s backs, that’s why we will all work so hard for each other this year. I’m excited for this season to start and show everyone that we are a team that people will not look forward to playing against.”

This Sunday’s game is at King’s Park in Dalkeith with a 2:00pm kick off. Admission is £3 for adults while children under the age of twelve can attend the game for free.