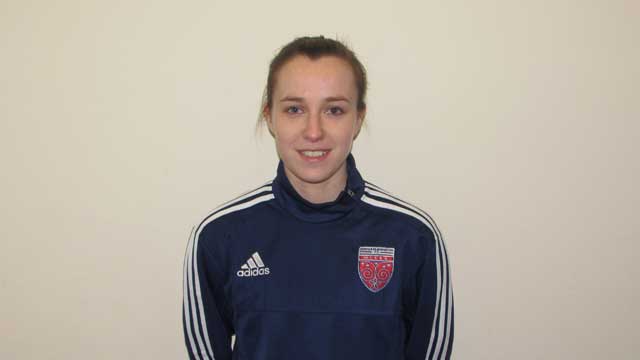 Forfar Farmington attacker Robyn Smith was delighted with her performance after grabbing a hat trick of assists in the 4-0 win over Hamilton on Sunday.

The 22 year old took part in her first 90 minutes of the pre-season after a short cameo the previous week due to illness.

Smith set up Louise Magilton for her double while her cross led to Kayleigh Noble’s goal that finished the scoring; Jade McLaren’s opener the only goal Smith wasn’t involved in.

The game looked like it could have been in doubt at times due to the weather conditions but the ex-Jeanfield striker felt they still managed to play well, scoring three of their goals playing into the wind. “It was good to get another run out, I only played twenty minutes last week because I had been ill so it was nice to play a full game this week.” she said.

”It was a hard task in the second half as we were going up against the wind and rain but I felt that we still managed to play some good football and we all stuck to the jobs that we were given by the manager.”

Smith was happy with her own performance albeit was disappointed she couldn’t find the back of the net with several chances. “Considering this was my first proper run out, I’m pretty happy with myself.”

She continued “I would have loved to have scored just for that extra bit of confidence but like I said I’m pretty pleased with my performance for my first proper game back. As a team we know we need to improve some things and we will work on them.”

Farmington will continue their pre-season in a fortnight against Glasgow Girls and Smith believes that the squad have improved over the last month, with tough sessions setting them up for the coming season.

“I think pre-season is going really well, everyone seems to be enjoying it. Some of the sessions have been brutal but we know at the end of the day it’s for our own benefit, there’s always a buzz about training no matter what the session involves.”

Manager Mark Nisbet was pleased with how his side played in tough conditions, especially in the second half, saying “It was a good work out for both teams in difficult conditions which didn’t make it easy for us. We started the first half off okay and improved on the previous week in regards to passing and possession.”
He continued ”The one thing that really pleased me though was a few individual performances and our pressing of Hamilton’s back line. It was good to give a few players playing time under their belts.”