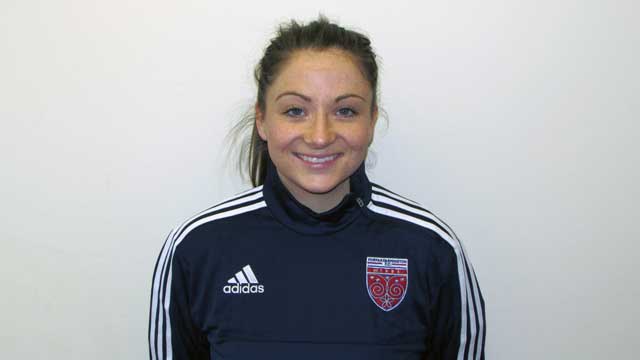 Forfar Farmington’s latest signing Louise Magilton claims she can’t wait to get her teeth back into Premier League football after almost three years away from the game.

The midfielder joins from Cumbernauld Colts after a short spell at the end of 2015 following a spell away from the game to concentrate on her university studies.

Magilton explained she is delighted to be back in the league where she spent time with Rangers and Spartans before her sabbatical, saying “I am delighted to sign for Forfar and be back in and around the Premier League. I was approached by several clubs at different levels but firstly the opportunity to be back to Premier League was the first thing.”

The 23 year old reckons the setup at the club is one of the best and believes the squad harmony is fantastic.

”Mark and the team invited me along and I was instantly impressed by the set up at the club and the great support staff they have.” she said. ”Everything was super organised and professional and the training was fantastic. It’s also a great bunch of girls in the team who are great to be around, I knew straight away this was the club to join if I want to get back to playing at my best.”

In her three years away, the former Scotland youth internationalist kept fit through triathlons and completing Tough Mudder but feels the Farmington training is tough albeit Magilton is enjoying it so far as the side get ready ahead of their first pre-season friendly against Hutchison Vale this weekend.

“Pre-season has been tough so far. After 3 years away from the game I knew it would be tough to come back, but the sessions are very high intensity and excellent quality so I have been really enjoying them so far and I am already starting to feel a bit sharper.”

Magilton also believes that the side has the quality to improve on last season’s results against the top six sides, having lost every game against them.

“After seeing the quality the club have I was surprised about the results last season.” she continued. ”I think the club has a great team of coaches and staff in place to take the team forward and a very motivated group, so I see no reason why we should not be competing with the ‘bigger’ clubs this season and I am delighted to be a part of it!”