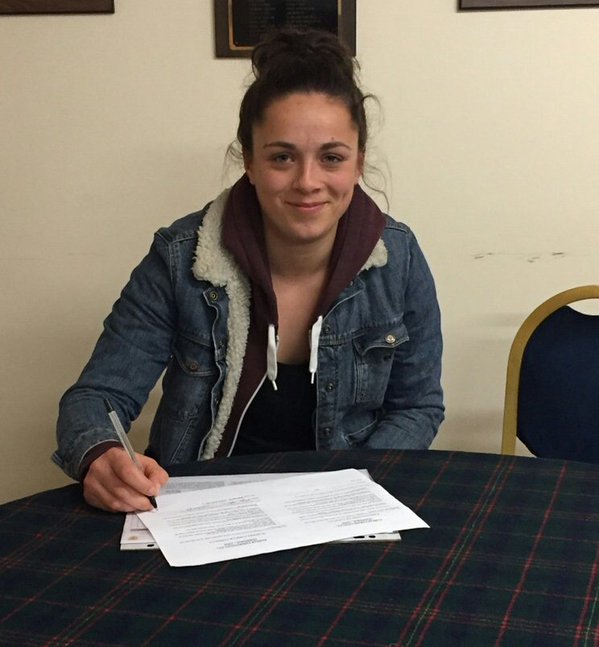 The 23 year old had a short spell in 2012 and spent pre-season at Farmington before being forced to leave due to issues.

McCarthy reckons that the season ahead will be tough for the girls but feels that they have the drive and desire to show that they still belong in the Premier League.

She said “I always loved the attitude that Forfar has and the drive so for that reason I was excited to come back. I really felt like I learnt a lot last time so for football technically I am also looking forward to improving.”

“Every single game is going to be a challenge but from playing with the team before I know the desire they have to perform well.”

The defender, who started her career at Moray Girls, said she hopes that she can improve herself in the reconstructed league each week. “I’m hoping to improve as a player and playing games each week is a personal aim. I think the team should aim for a certain spot on the table where we would like to be sitting at the end of the season and aim towards that.”

McCarthy had some parting words for her former side, where she had spent the last six years bar the short spell at Station Park.

“Last season was hard due to injuries, Inverness are a close team so we stuck together but physically our team was struggling.” she said.”I loved playing for them, the team is such so close and I have had some amazing times with them. The girls there will always be great friends and I will miss them a lot.”

Megan joins Robyn Smith in signing for Farmington and manager Mark Nisbet is delighted with both signings so far.

“I have worked with both players before and know what they can bring.” He continued. “A big thing for me is their attitudes towards developing their game. It also gives us a bit more experience in the group.“

Nisbet revealed he has plans to add more signings before the end of the month and could possibly make a couple of those this week in the side’s final training session before they return in the New Year for pre-season.

“The plan is to announce another few signings before the end of the year and a couple in the New Year. The thought process behind this is to increase the competition in the squad and to also give us more options for a game day.”

“I don’t like to talk about players who are no longer with the club but wish them all the best. My focus is on the players who have committed and are preparing for the season ahead.”