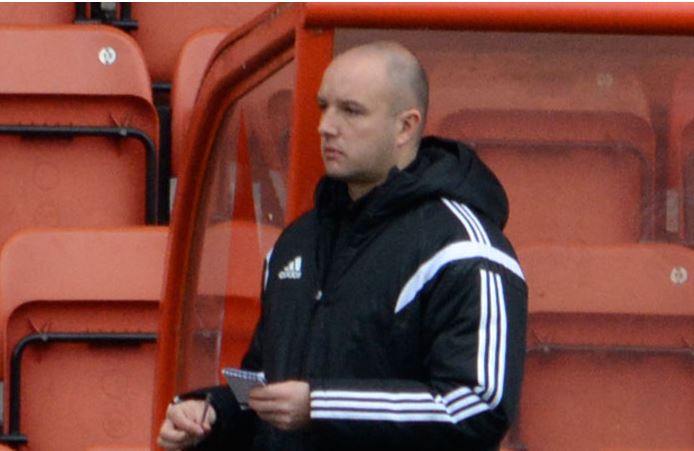 Forfar Farmington’s returning head coach Mark Nisbet is delighted to be returning to the club after two years away.

The 33 year old was named as Damon Neish’s replacement last week with Neish departing after he and the club had a difference of opinions over the direction of the side.

Nisbet was in charge of the Premier League side until 2013 and in the two years since his last stint at Farmington he has had spells at Forfar Athletic coaching their youth team and Aberdeen Ladies; where he helped them reach fourth place this year.

Speaking following his appointment, Nisbet said “I’m very excited to be back. I enjoyed my time away from the club and had a lot of good experiences both in the men’s game and with other female clubs. It gave me the opportunity to work with other coaches and review my own style and thought processes which has been really helpful.”

The Farmington side he has taken on finished their season in eighth place in the Premier League, avoiding relegation by a twelve point margin following an incredible ten wins in eleven games stretching back to June when the side had previously won just once in ten games.

Nisbet says that that run shouldn’t be ignored but added that it will be difficult to achieve that again with the league cutting down from twelve teams to eight next season.

“The group did extremely well to go on that run and that needs to be acknowledged.” he said. “It will be a far tougher task next season and as such we will need to strengthen the group in terms of numbers and SWPL experience which we are working extremely hard just now to achieve.”

Nisbet feels that although it will be difficult it was the right decision to reduce the amount of teams. “I feel it was a big but important step for the league and one I fully support. It will ensure the boundaries are pushed again which can only be a good thing.”

The league will again have 21 games, with Farmington facing their rivals three times. There will also be just one team going down to the newly created SWPL2 which will ease nerves for some but Nisbet already has eyes on the top half.

Joining him at the club are a few familiar faces, with Kev Candy, Ewan Greenhill John Diplexcito and Scott Knox all returning for their second spell at the club.

Candy said about his return that it was “extremely nice to be back.”

Bryan Middleton of the previous backroom team still remains; the talented performance analyst will working with Greenhill. Goalkeeping coach Robbie Hannan will also still be a part at the club as will Nathan Flight and Lee Smith.

One person that has departed the club recently is Tori Sousa, who returns to America after her three month stay at Forfar. The highly rated midfielder netted an astonishing ten goals in ten games while chipping in with six assists.

Sousa has already stated her intentions of returning to the club next year which will be a massive boost to the side if she does indeed do so.