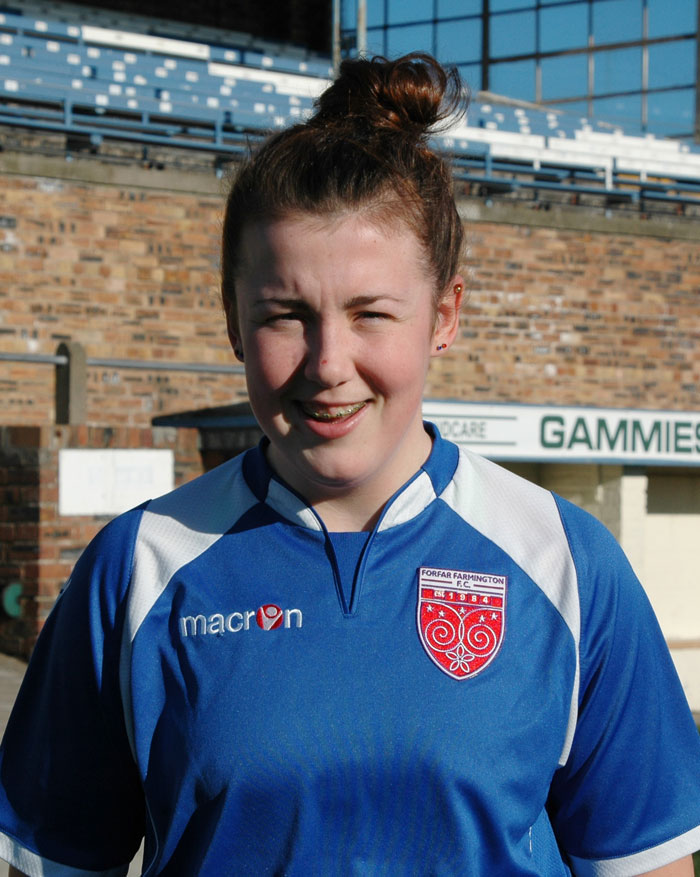 Forfar Farmington defender Jade McLaren was delighted to reach a half century of appearances for the Premier League side at beginning of this month at just seventeen years old.

The defender made her debut in July 2013 when she was fifteen and has impressed since then with other sides keeping tabs on her last season.

McLaren spoke of her pride at being allowed the chance to make her mark on the senior ranks “Reaching fifty appearances in two and a half seasons feels great and I feel very privileged to have been given the opportunity to do so at a very young age. I’m hoping I can reach another milestone of some sort by the end of next season.”

The Fife based youngster has been played in different positions in her time in the side, beginning at left back before shifting to centre back followed by right back and has even appeared at right midfield, where she grabbed a goal against Hibernian in front of Scotland manager Anna Signeul.

McLaren is happy at having tested herself in these positions but reckons she’s at home at right back, saying “I feel that right back is my best position as I like to go forward and attack. That being said, I loved getting the opportunity to play in these other positions as it has allowed me to test my ability as a footballer and progress.”

For those that haven’t kept tabs on the side, they pulled off a fantastic escape this year having garnered just four points from their opening ten games, leaving them second bottom; they won ten out of the next eleven with nine games in a row to finish above the relegation places by a impressive twelve points.

McLaren spoke of her joy of achieving safety “I felt great relief that we stayed up; it felt like a great weight lifted off my shoulders, especially as we deserved it and with the new league coming up in March, I can’t wait for that.”

The defender has also stated her intention of staying at Farmington in 2016 in a reconstructed league. The league had 12 sides in 2015 and will be cut down to eight in an attempt to make it ‘better’.

“My plans for next season is to stay at Forfar.” she said. “I want to up my game by improving my fitness and technical ability and then my next aim is to hopefully be in contention for the Scotland Women’s U19’s squads.