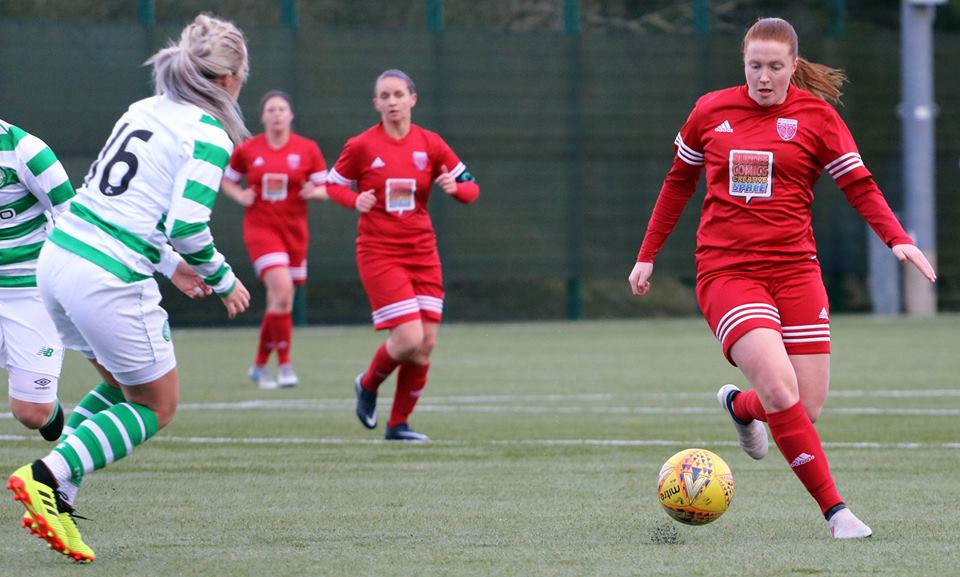 Forfar Farmington’s 2019 season got off to a disappointing start as they fell to a 4-0 defeat to Celtic on Sunday.

The Scottish Building Society Scottish Women’s Premier League One kicked off on Sunday with a trip to K-Park and head coach Stevie Baxter can’t be disheartened despite the scoreline.

In his first game in charge, Baxter handed a second debut to Hannah Stewart with Kate Williamson and Philippa Weber having to settle for a spot on the bench.

Just two minutes after the game had started Farmington were dealt a blow as a cross into the box was bounced around before Sarah Ewens forced the ball past McNicoll.

Hannah Stewart came close to pulling one back for Farmington in the 23rd minute as she cut in from the left wing before curling just past the post.

Celtic were clinical with their first half chances as they netted three times with the three clear cut chances they carved out; the third coming in the 39th minute as Natalie Ross bundled a Katherine Smart cross in off the bar.

The hosts came close to a fourth shortly after the break as Kodie Hay fired straight at McNicoll but they went one better after 51 minutes.

A ball into the box wasn’t cleared properly and Ross took advantage to fire into the top corner, giving McNicoll no chance.

Smart had chances to extend the lead but couldn’t find the target as the game inched past the hour mark.

In the 70th minute Ewens failed to trouble McNicoll while Forfar started to create more chances at the other end.

Philippa Weber came on for her debut and almost capped it with a goal as she met Robyn Smith’s corner but couldn’t force the ball on target at the back post.

A free kick just inside the Celtic half was launched towards goal by Donna Paterson and was met by Kayleigh Brough; her header creeping wide.

In injury time Danni McGinley burst down the right wing and as she advanced towards goal she shaped up to shoot only for a defender to make a last ditch clearance.

Despite the result, Farmington performed well in the second half and will look to improve when they host Motherwell this Sunday at Station Park, kick off is 1pm.